What Exactly is a Folding Electric Bike?

Looking for a convenient and eco-friendly way to get around town?

Look no further than the folding electric bike! This battery-powered bicycle was designed with one goal in mind: convenience.

Thanks to its collapsible frame, you can fold it into an ultra compact package that is easy to store and transport wherever your adventures may take you - some models even come complete with a tiller which reduces its dimensions even more.

And don't worry; all of the features found on conventional e-bikes such as pedals, brakes, drivetrain etc., are still included – so this tiny two wheeler packs quite a punch!

Folding electric bikes are gaining popularity thanks to their ultra-versatile design, perfect for those seeking portability and practicality. But these ingenious vehicles aren't so common - yet! As technology advances and people become more familiar with them, folding e-bikes could revolutionize how we get around.

How Did Folding Bikes Come About?

Folding bikes have a surprisingly long history in transportation. Predating the 1980s, they were originally designed for military applications around the late 1800s.

However, it wasn't until new designs hit the market that folding bikes grew to become an increasingly popular option on everyday commutes and recreational activities over subsequent decades.

A major landmark was reached when Yamaha released their prototypes of e-bikes as early as 1989 - followed by them creating what we now know widely today as Pedal Assistance System (PAS) technology some four years later!

Today, electric folding bikes have proven to be among the most popular formats of e-bikes on the market. Manufactures are getting even more creative with the styles of folding e-bikes they are rolling out, with some adopting fat tires to appeal to a growing fan base.

What are the Common Specs of Folding E-bikes?

These e-bikes feature all of the standard components--a motor, battery, and controller–that you’d find on other electric bicycles.

Depending on design preferences, these elements can be neatly integrated into frame construction or built onto racks attached to frames for convenience in storage and transportability when not powered up! Motors also vary from front hub/rear hub motors that enable easier folding mechanisms - common amongst foldable bicycles – instead of mid-drive models seen with traditional ebikes. 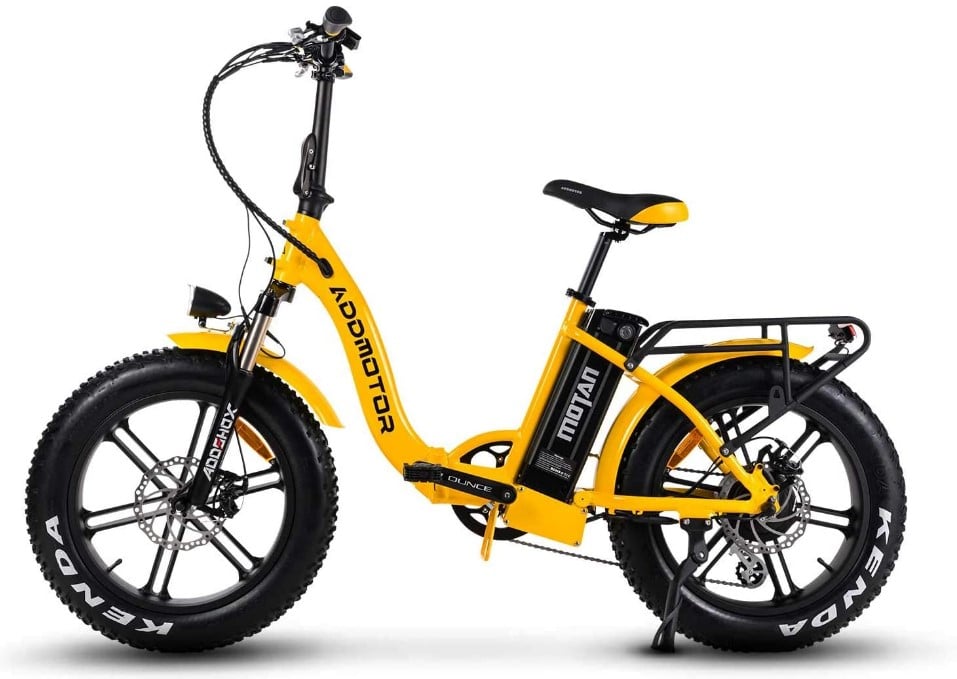 The bike from Addmotor in the picture above is essentially referred to as folding fat tire e-bikes and are built to offer enhanced stability and traction. The increased surface area of the tire enables these types of folding e-bikes to “float” over soft surfaces like snow and sand, making them a preferred option for extreme adventures.

Finally, e-folding bikes feature a U-shaped bar that sits below the chainring, which is meant to protect the chainring against touching the ground when the bicycle is collapsed. Essentially, it acts as a “third leg” that enables the folded bike to stand up when placed on its legs.

What are the Benefits of Folding E-bikes?

Thanks to their ingenious and unique design, electric folding bikes tend to be more practical to use compared to a normal e-bike. Generally, the best folding bikes will offer you the following benefits:

Ease of Storage and Transportation 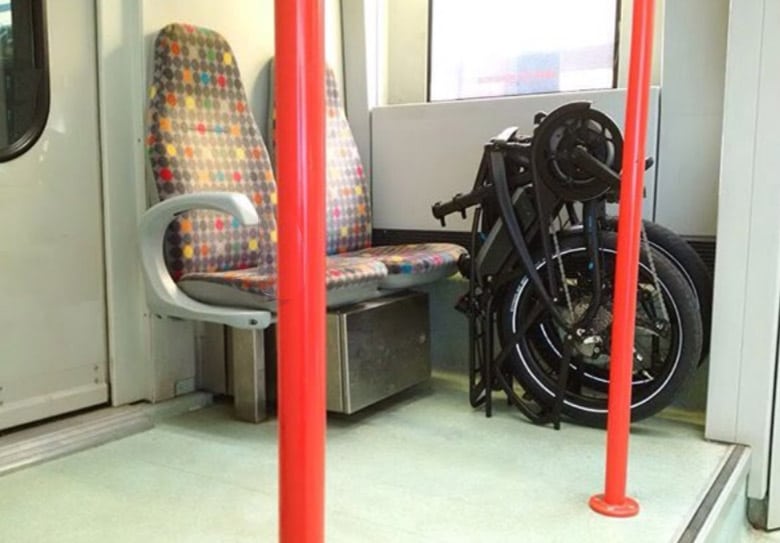 Folding e-bikes offer a unique advantage when it comes to transporting and storing them - they can be easily folded up into an exceptionally compact size.

This makes these bikes incredibly popular with people who own boats, RVs, planes or just need something that fits nicely in the back of their truck.

After use you don't have to worry about finding somewhere for your bike as its small nature allows you store it almost anywhere such as cupboards and closets without taking up too much space!

Electric folding bikes and commuting are a match made in heaven! When folded, you can get into the subway with no issues. The compact package also means you don’t need too much space for storage when you get to work.

You can neatly tuck it under your office desk. This not only assures the security of your prized possession but also saves you the cost of public bike rack parking fees.

Many fear that folding and unfolding a bike can be an inconvenient task, but the reality is quite different. Successfully executing this move requires practice - once you do it several times, like most things in life, it gets easier!

The mechanism used for these bikes makes them easy to fold with just one simple movement; however caution should still be taken as awkward bending could result in injury.

What are the Disadvantages of Electric Folding Bikes?

Although generally considered to be practical, the folding e-bike format doesn’t favor all e-bike lovers. For this reason, they can be slightly inconvenient for riders in the following ways:

They are not Suited for Tall People

Electric folding bikes are a great size for those on-the-go, but can be uncomfortable to ride if you're of taller stature due to the 20” tires. It may feel like taking a voyage down memory lane as your body gets adjusted to this childlike riding position - quite an awkward situation!

Folding e-bikes are typically shorter and feature a straight handlebar attached to a fixed rod. This can cause some difficulty when turning sharply or navigating tight spaces, due to the narrower margin of error in comparison with longer bikes; however, once you become accustomed to its operation this should be much less of an issue..

Any abrupt turns on a 20” folding bike cause you to lose more control than if you were to do the same on a standard bike. However, this should not be a problem as you get a feel of the bike and learn your way around its operation.

Best uses for a Folding E-bike

The folding e-bike was designed for various uses. If you are thinking of getting one, check whether you fit any of the categories below: 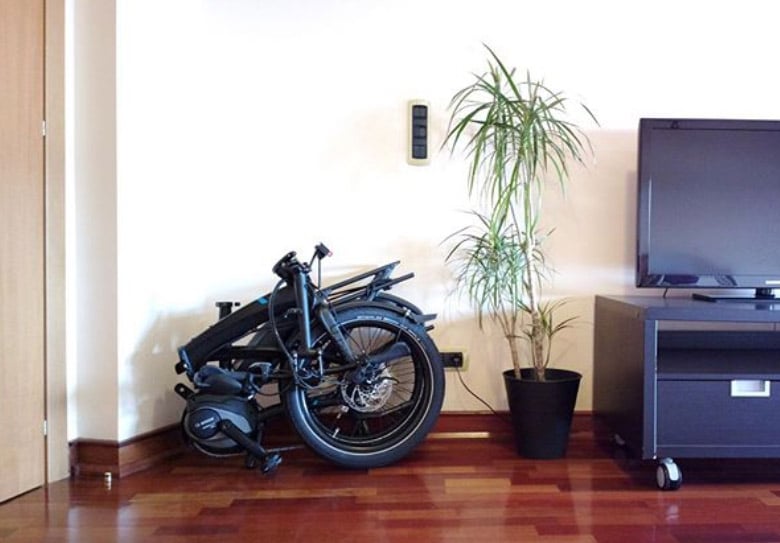 What are Some Common Misconceptions Regarding Electric Folding Bikes?

Several myths about folding bikes are propagated in electric biking circles. Let us look at two common misconceptions flying around and try to dispel them.

Folding e-bikes have long been an object of misunderstanding and misconception. Commonly, people think that due to their folding frames, these bikes are weaker than other standard designs - a baseless claim now proven untrue with the introduction of modern models featuring aluminum alloy frames composed mainly of magnesium and silicon for unmatched strength.

Coupled with heavy duty welded hinge clamps designed to hold up to 300 pounds in weight capacity; it's clear why electric foldable bicycles remain one of the most popular modes transportation today.

Folding e-bikes are great for those who want a convenient way to get around, but it's important that you pay attention to the strength of its clamp.

A weak or loose attachment will cause instability during your ride and could even be dangerous! To ensure your safety, always have an experienced technician check out any bike before using it.

Also keep in mind; great quality bikes don't come at bargain prices - if something seems too good to be true, there could very well be hidden costs waiting just down the road.

On the other hand, if you invest in a high-quality folding e-bike from a reputable brand, the frame is probably going to be as solid as any other standard e-bike.

This is another incorrect assumption about folding e-bikes that you should be aware of. Even with the electric motor removed, folding e-bikes can match the speed of your average road bike. 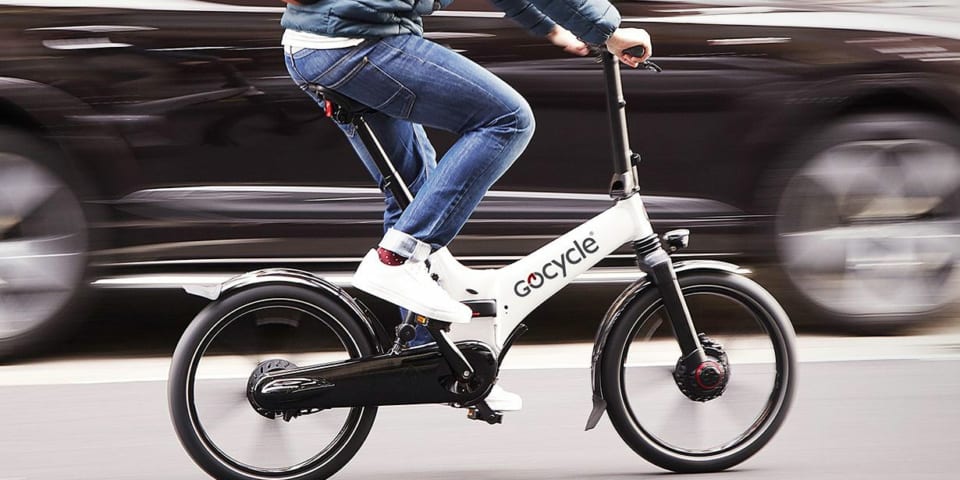 Those who are considering a folding e-bike should not be discouraged by the doubts of skeptics. Contrary to popular belief, even with the electric motor removed these bikes can keep up with their standard road bike counterparts!

This is due in part to continued innovation from bicycle manufacturers resulting in an improved design and its ability for riders to overcome any lag when pedaling. What's more, folding e-bikes have been proven structurally sound and don't compromise on speed or durability - so go ahead and make that purchase without worry!

The e-bike market is buzzing with the potential of folding bikes - it's no surprise that their popularity as an alternative form of transport has skyrocketed in recent times.

As companies strive to be at the forefront when it comes to technology and innovation, these electric foldable models have become more attractive than ever before.

If you've been considering whether or not a folded bike could be your ideal mode of getting around town but were unsure, this article should provide all necessary guidance for making a well informed decision!