How Much Does An Electric Bike Weigh?

Compared to traditional bikes, electrical bikes increase the riding range, limit joint pains and take the strain off the ride for a comfortable biking experience. They also allow riders to ride on sidewalks and cut through parks, which may not be accessible for motorcycles and mopeds. In short, they are the ideal alternative to commuting by vehicle, and that’s why they’re so popular!

Aside from the price, the first thing that buyers worry about when shopping for an electric bike is their weight. Compared to traditional bikes, battery-powered bicycles pack a couple of extra pounds, which makes the bike harder to carry, especially climbing stairs.

So, what is the actual weight of an electric bike? E-bikes are slightly heavier than their conventional counterparts.

Typically, an average non-electric bicycle may weigh anything between 30 and 35 pounds whereas a typical front, mid, or rear-drive electric bike version of the same model will weigh between 40 and 70 pounds.

Nevertheless, the actual weight of an e-bike will depend on its type, frame material, motor and battery size. 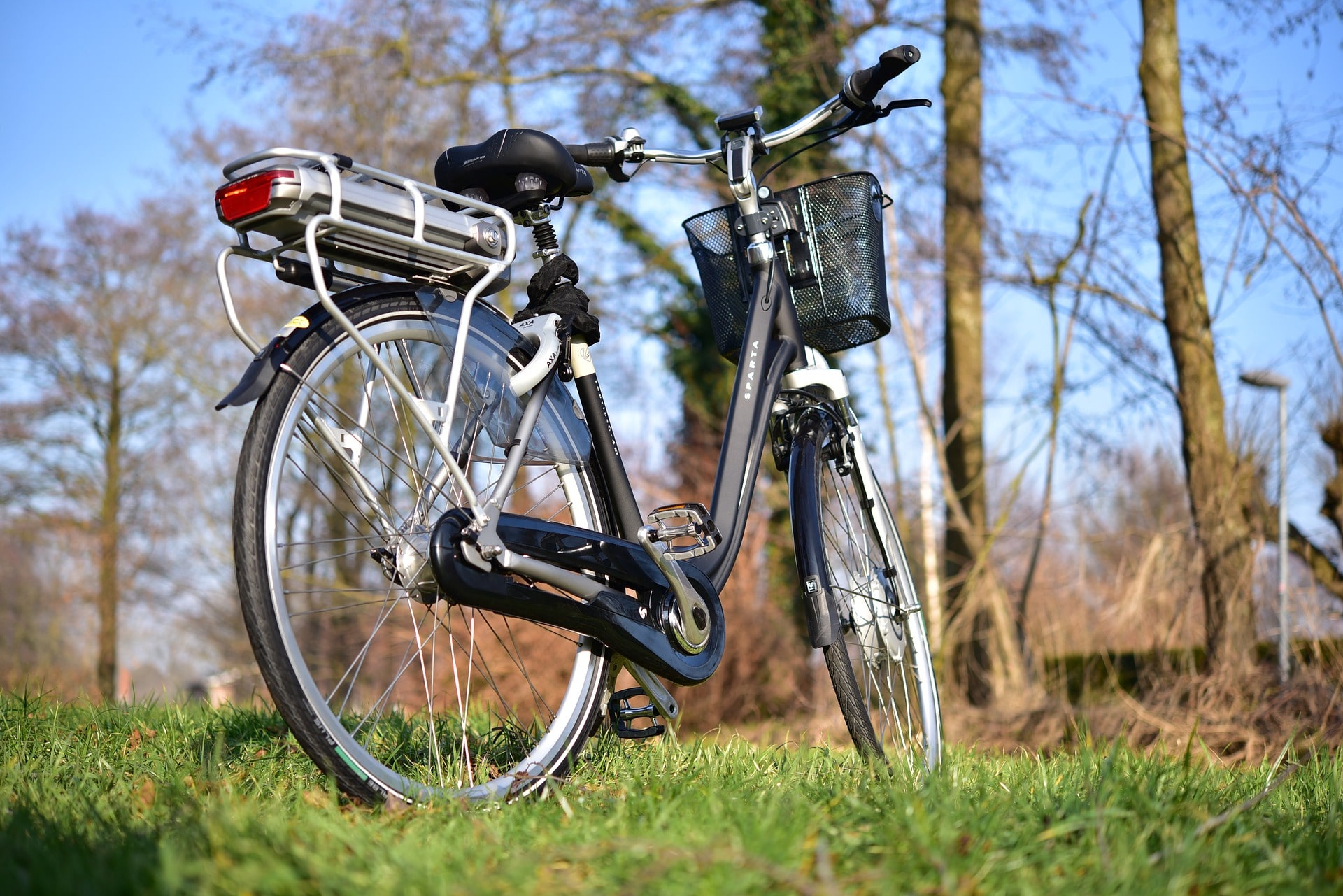 One of the major factors of an e-bike’s weight is determined by the type of bike. Road bikes are usually designed to be as light as possible to enable the riders to cycle as fast as they can while mountain bikes are meant to be heavier to handle the harsh off-road conditions and rugged terrain.

Below, we consider the average weights to expect from various types of electric bicycles.

Commuting e-bikes are also referred to as hybrid electric bikes. This is due to the fact that they come with the handlebars of mountain bikes (MTBs) but have the wheels of road bikes. This blended design allows you to commute to work more comfortably. To allow for greater distances, the design features larger batteries, which increase their overall weight.

As such, the average weight of a commuting e-bike is between 50 and 70 pounds.

Road electric bikes are designed to allow the rider to cycle as fast as possible. This means that they have pretty thin wheels to go with a lean frame, as well as handlebars that curve forwards. The design of these bikes implies they have a lighter weight than most other types.

These are probably the most popular e-bikes because of their versatility. While they are designed for off-road use, they are just as capable on the road. The e-MTBs are made with a suspension to limit the impact of bumps and can have up to 750W motors.

Electric mountain bikes can weigh anywhere between 40 and 70 pounds, with most of them closer to the 70-pound mark. 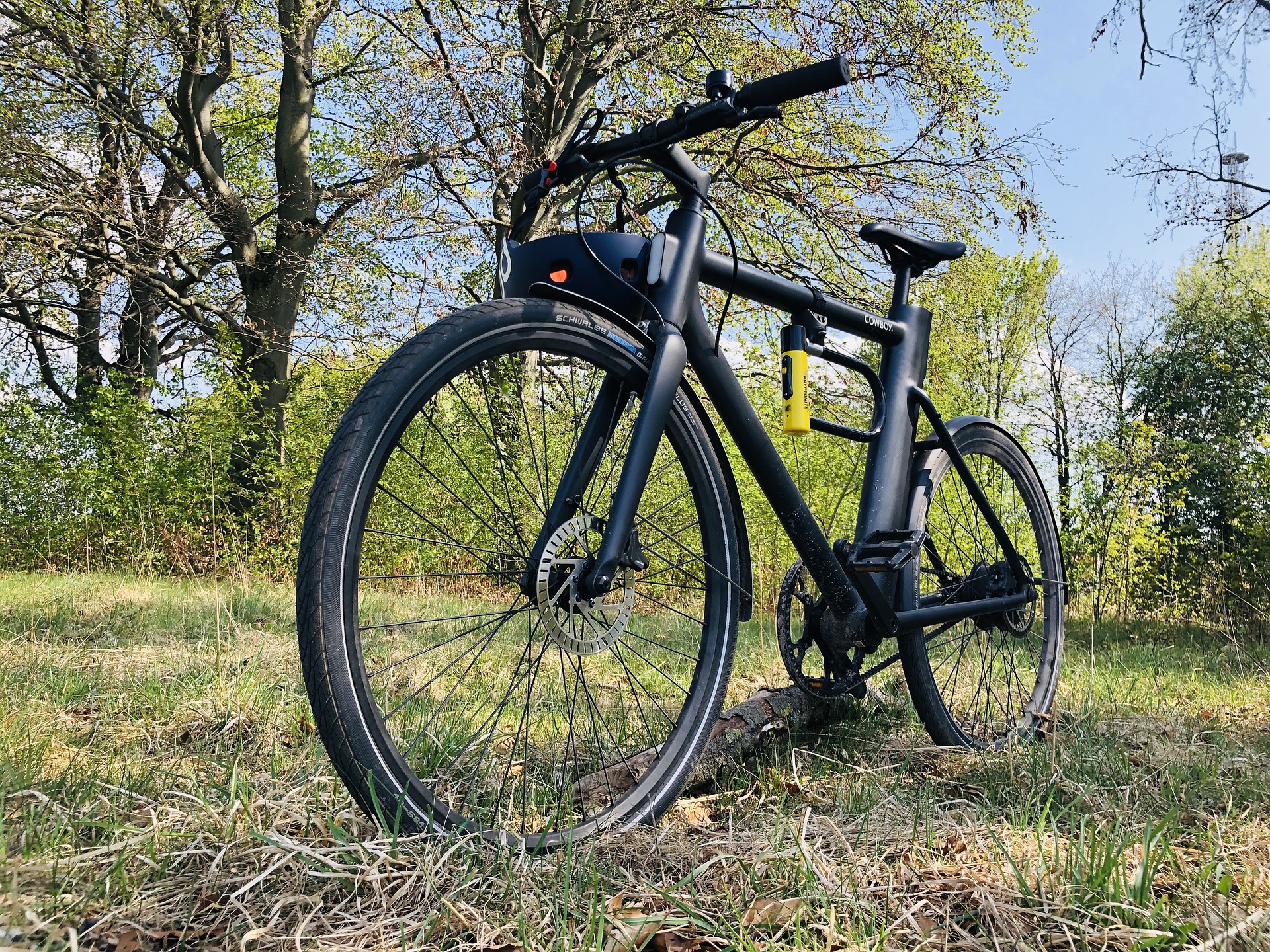 These bikes allow the rider to maintain an upright posture while riding. They also have soft seats with wide handlebars. Generally, they enable the user to have a more relaxed experience than other bike designs and are more suitable for leisure riding.

Fat tire bikes are best suited for the off-road terrain and perform great on all kinds of surfaces, including snow, mud, gravel, rocks, etc. The huge tires naturally add to the overall weight of the bike, as well as strong frame design.

These bikes aren’t quite different from the cruiser e-bikes, with the unique features being handlebars that extend backward as opposed to sideways and a step-through frame.

Comfort bikes can weigh around 50-70 pounds. 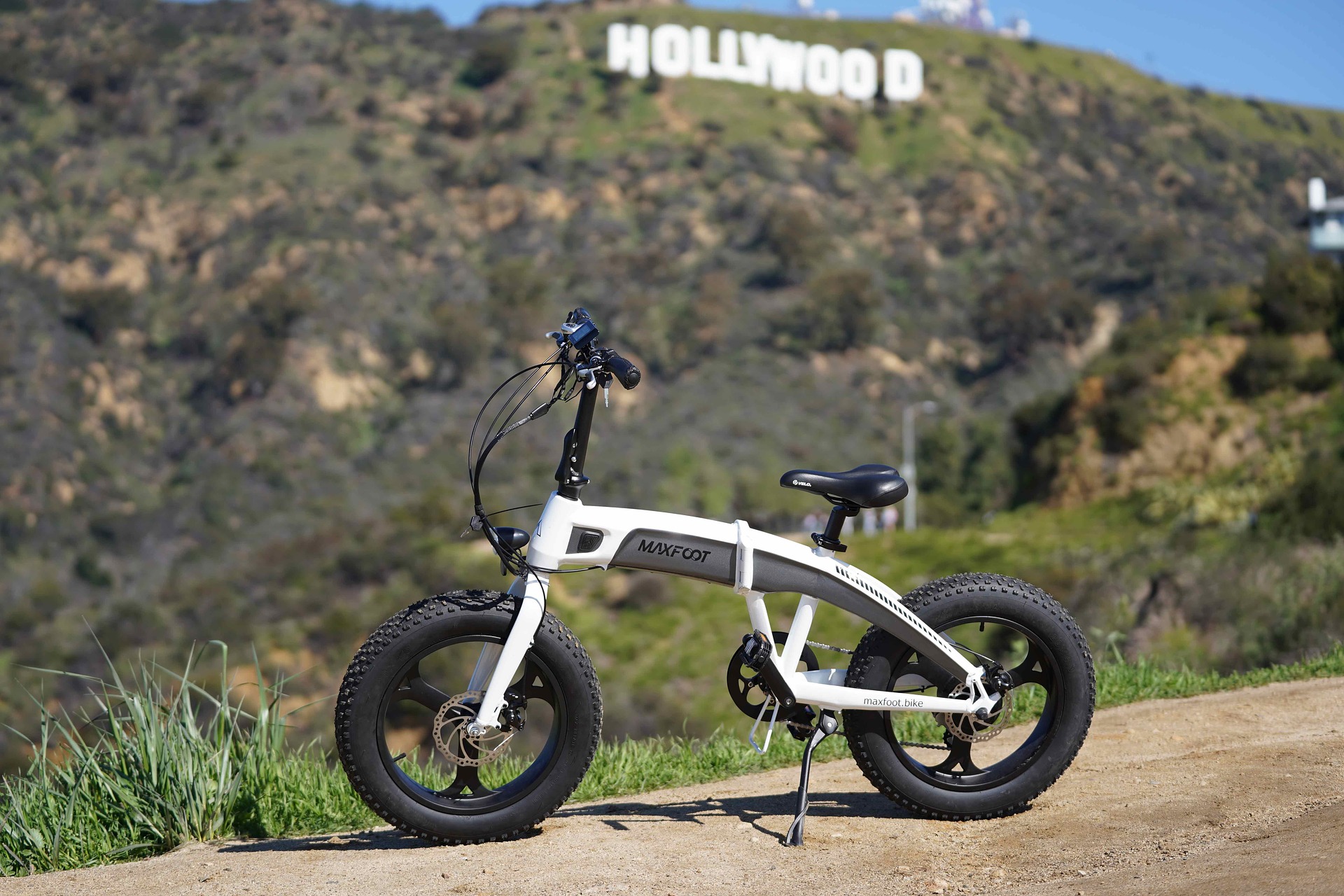 ​Folding e-bikes feature a design that makes it easy to store. They are generally more convenient to carry along on trips because they comfortably fit in the boot of a car . You’ll find different types of folding e-bikes in the market, including mini-folding bikes, folding e-MTBs as well as folding fat tire e-bikes.

Generally, mini-folding electric bicycles weigh anywhere between 30 and 40 pounds whereas the folding electric mountain bikes will tip the scale at 40 to 70 pounds. Finally, folding fat tire electric bikes can weigh around 50 pounds.

What Affects the Weight of Electric Bikes?

The major things that make electric bikes heavier than regular bikes are the additional motor and battery, which add around 20 pounds to the normal weight of a traditional bike. Furthermore, some e-bikes may also come with an LCD; although this doesn’t usually add much weight.

Another notable feature on e-bikes is their wider wheels compared to ordinary bikes. This is meant to increase the level of traction on the road and make it easier to ride on rough terrains. The only problem here is that the wider wheels increase the amount of drag created, requiring more effort to move the bike.

Does the Extra Weight of an E-bike Affect Your Ride?

With traditional bikes less weight may seem advantageous because it reduces the strain while cycling and gives you better control of the ride. However, this is not always the case for e-bikes since less weight means a smaller battery and/or motor, which in turn reduces the range you can cover on pedal-assist.

Given that the largest addition of weight in an electric bike comes from the electric motor and battery, the only way to significantly reduce the weight would be to use a smaller battery and motor, which also goes against the whole point of buying an electric bike-motor assist.

Fortunately, more big brand names are entering the e-bike market and due to advanced technology electric bikes are weighing less with every new model. 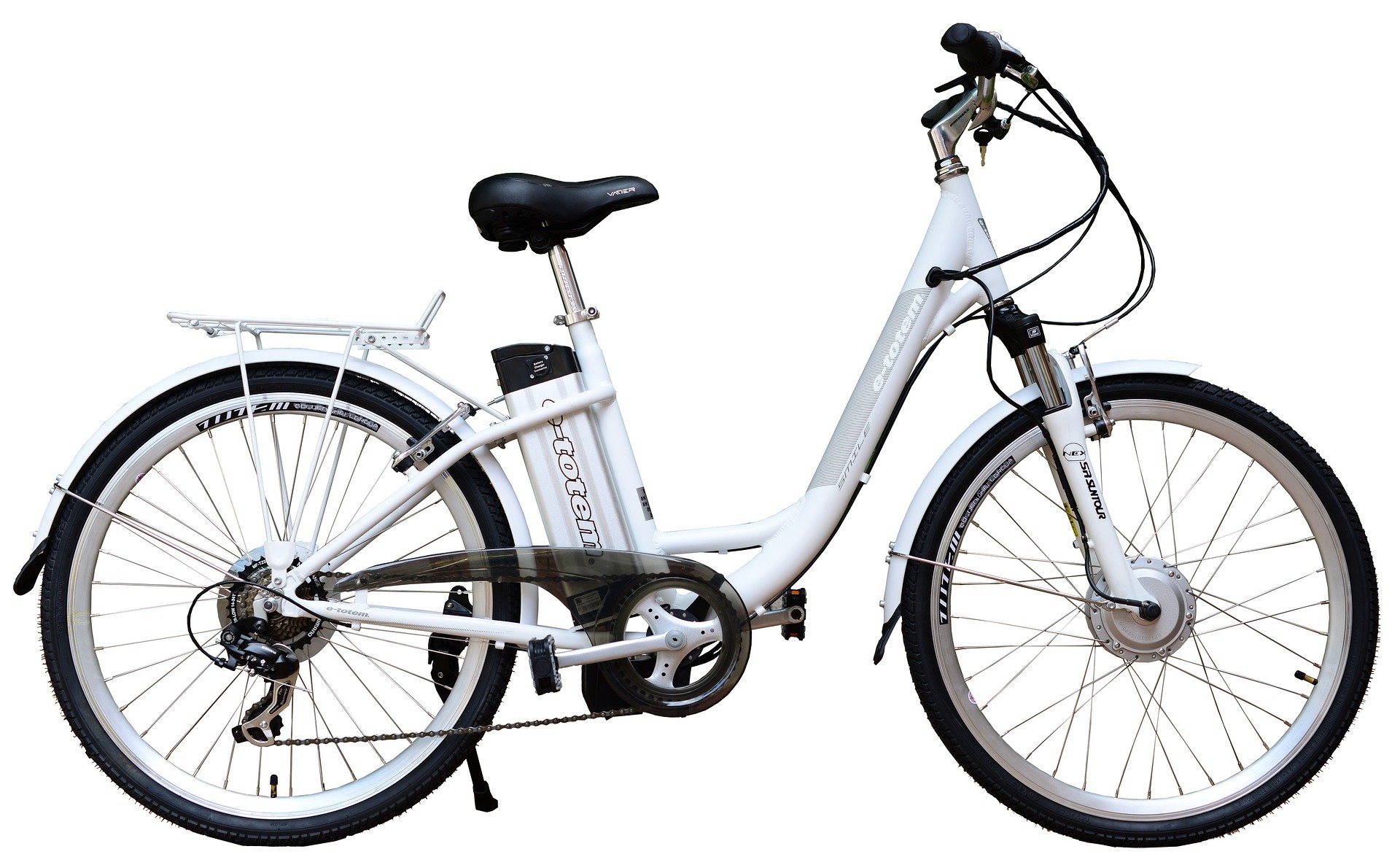 With improved battery designs and lighter frame materials, you can find e-bikes today weighing as low as 30 pounds, even though these have a pretty premium price tag!

The extra weight is not always a bad thing on electric bikes as due to  pedal assist you’ll barely feel the extra weight. You will still be able to achieve speeds that a regular bike rider will attain without too much effort.

So, if you’ve been wondering how much electric bikes weigh, the above post should give you a rough idea of the weight of the different types of e-bikes available. Given the heavier weight of e-bikes, remember you still have the advantage of the electric motor to give you a boost whenever you start to feel the pinch of the ride!

Emma`s main passion is cycling, that`s why she is always looking for an amazing new e-bike to make her journey even more unforgettable!

How Fast Do Electric Bikes Go?

The Future of Electric Unicycles – A Fad Here to Stay?