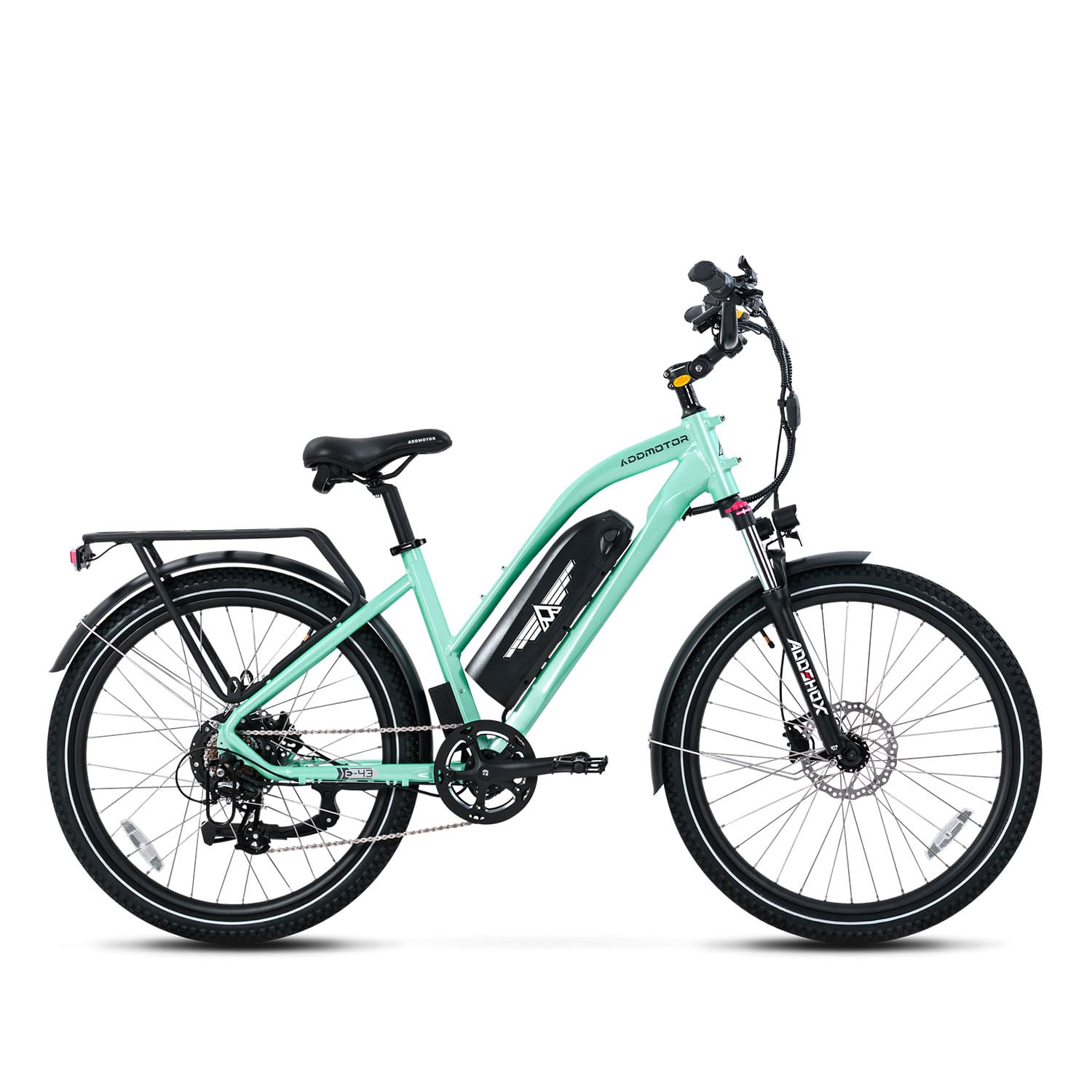 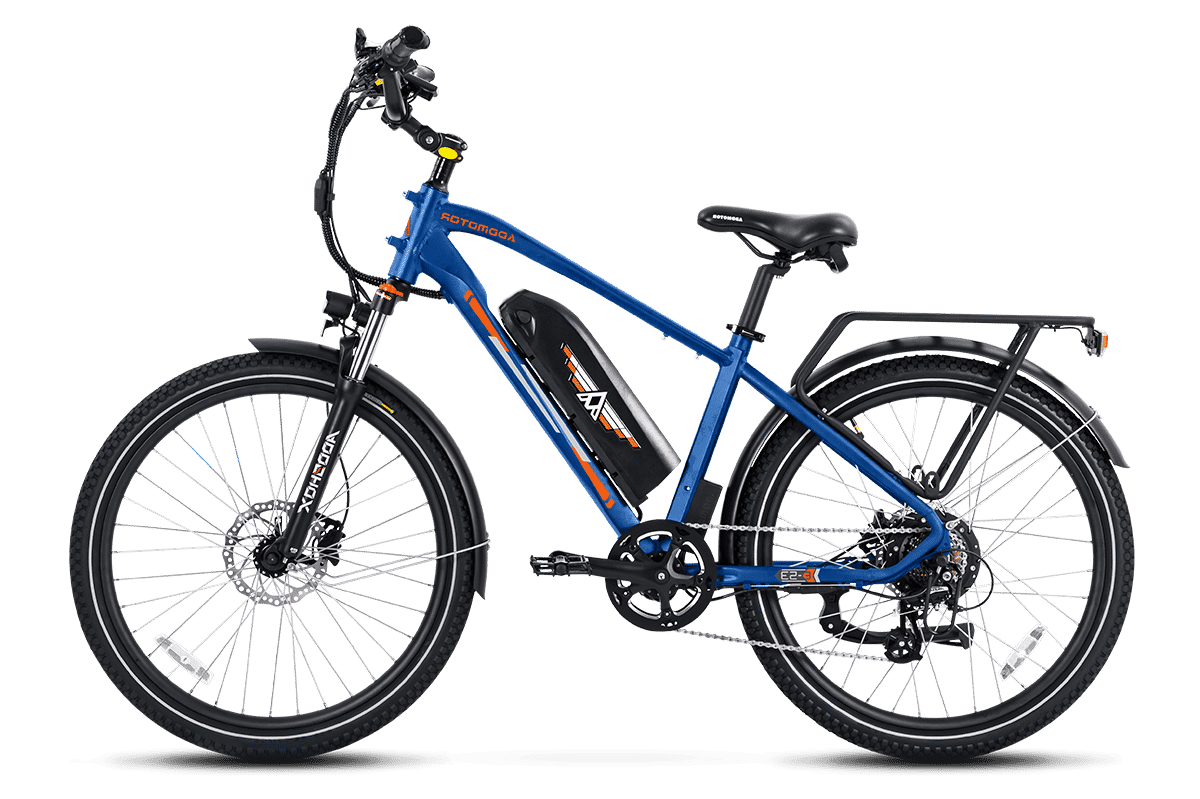 Replacing cars as commuter vehicles is one of the best use cases for e-bikes. This can actually help would-be e-bike riders by giving them the confidence boost of electric pedal assist. To get more people into e-bike commuting, Addmotor introduced their city bike line known as the City Pro.

This company is typically known for more unconventional designs, such as the Wildtan M-5600 - an e-bike designed for outdoor enthusiasts. With their City Pro e-bike line, Addmotor went for the most straightforward design. The result is a comfortable commuter bike with quite a lot of range (for the price) and speed.

Both E--43 and E-53 come with identical features. The only difference between these two e-bikes is the frame design. E-43 features a step-through design, while the E-53 comes with a standard step-over design.

Speaking of frames, let’s take a closer look at what you get.

As you can see, the specs on this e-bike are nothing to scoff at. Not only is it lightweight for an e-bike, but it also comes with a powerful motor and high-quality hydraulic brakes. 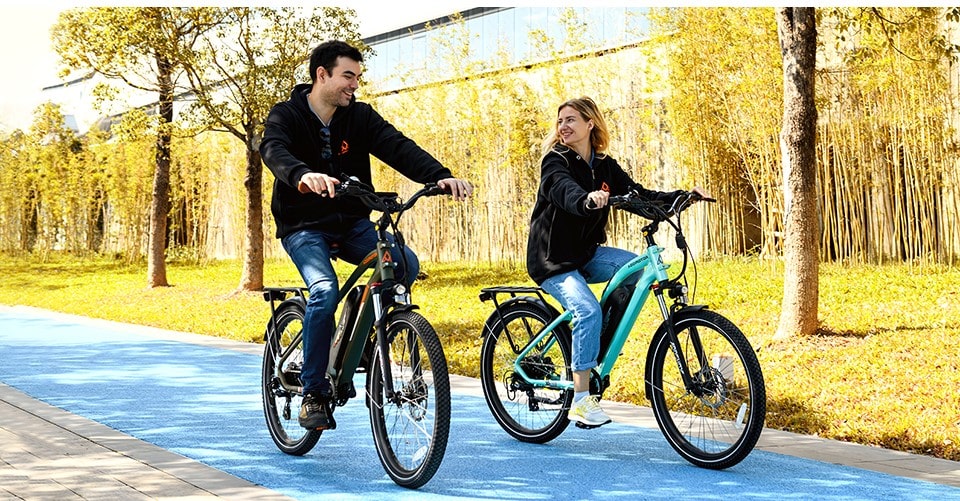 As I mentioned above, the only difference between the E-43 and E-53 is in the middle tube design. Both e-bikes have the same total length of 70 inches and a wheelbase of 44 inches. The same is true for the minimum seat height, which measures 28.3 inches. This means that even if you’re 5’ 2’’, you won’t have much trouble mounting the 5-43 and E-53.

The seat tube can be extended to a maximum height of 36.6 inches. This is pretty tall. I’m a tall guy, and even I didn’t have to raise the seat tube all the way up.

When it comes to which model is easier to mount, that would be the E-43. Thanks to its step-through design, it doesn’t require you to do mild acrobatics whenever you want to go for a ride. 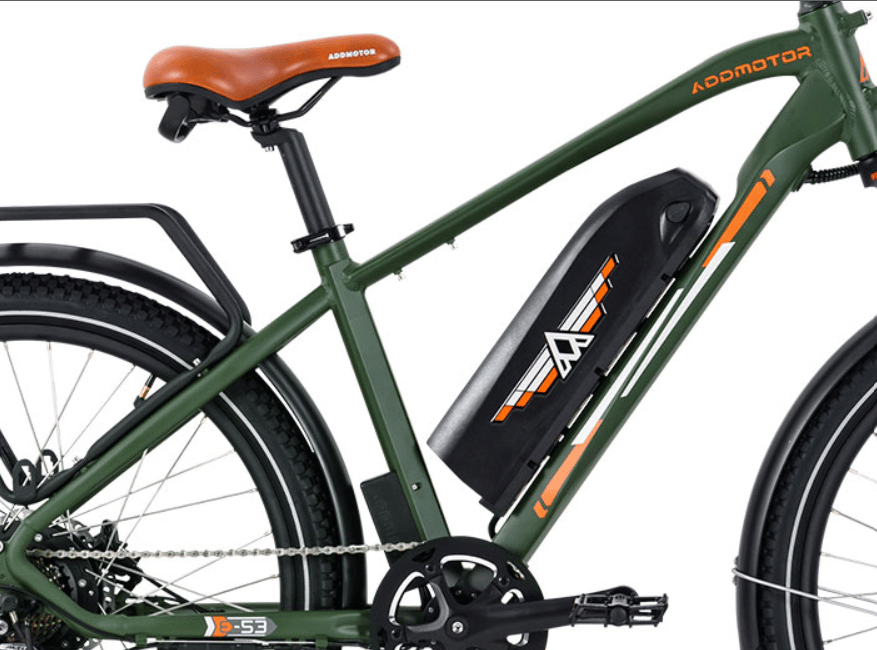 As for the whole design of the frame, it's your standard city commuter deal. Both e-bikes feature a polygon frame with gentle curves and tapered tubes.

As for the color options, both models come in Neptune Blue and Pearl White. Each model also comes with two exclusive colors. E-43 is available in cyan and rose gold, while for the E-53, you can choose between Olive Green and Khaki.

Out of all the colors, I like Neptune Blue the most. It’s a nice solid color, and it doesn’t make the bike stick out too much. That is a great feature because it reduces the chance of someone stealing it.

One of the things I don’t like too much about both e-bikes is the front fender and light assembly. Both the fender and the light are fixed together on the same screw. If that screw breaks, you’ll have to deal with two loose components, not just one. 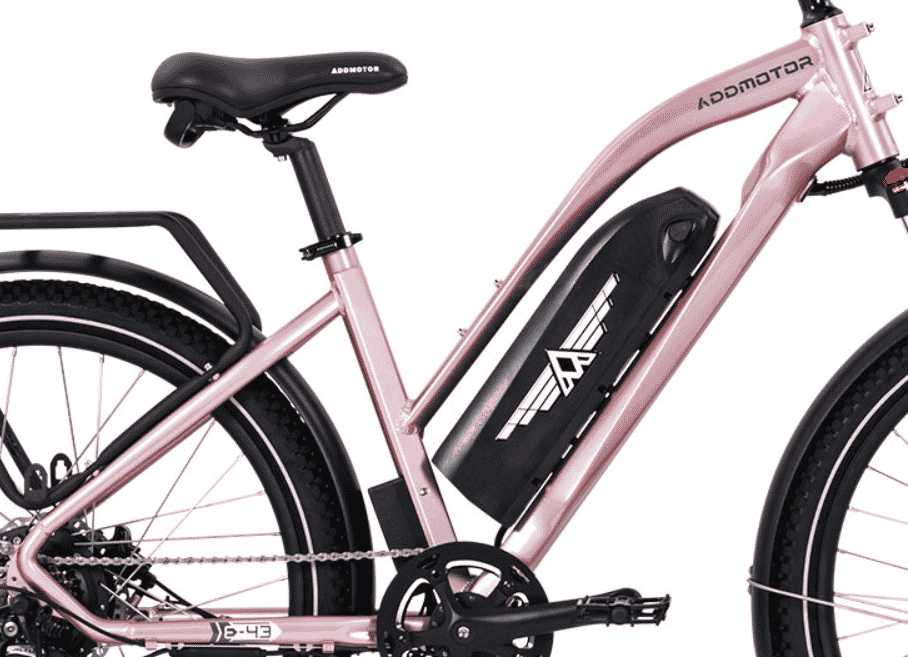 Another thing I find a bit annoying is how finicky and difficult it can be to remove the battery from the E-43. Because this model has a step-through design and the battery is mounted on the down tube, you will ding it against the frame whenever you remove it. This could be avoided if the battery was mounted at least half an inch lower.

What I like about these e-bikes is the design of the cargo rack. The rack bolts into the seat stay. The design is simple and so good that it’s a shame more e-bikes don’t utilize this design.

The rack has a carrying capacity of around 55 pounds. Unfortunately, there is no front rack, but both e-bikes come with a front suspension. The suspension features 100 mm of travel which is adequate for city roads. It will absorb most of the road bumps.

500 Watts of nominal power is pretty standard for most commuter e-bikes. However, where E-43 and E-53 stick out is in the peak power output. The motor on these e-bikes can produce up to 907 Watts of power when pushed to the limit. This is a lot of power, more than enough to get you up even the steepest of hills. 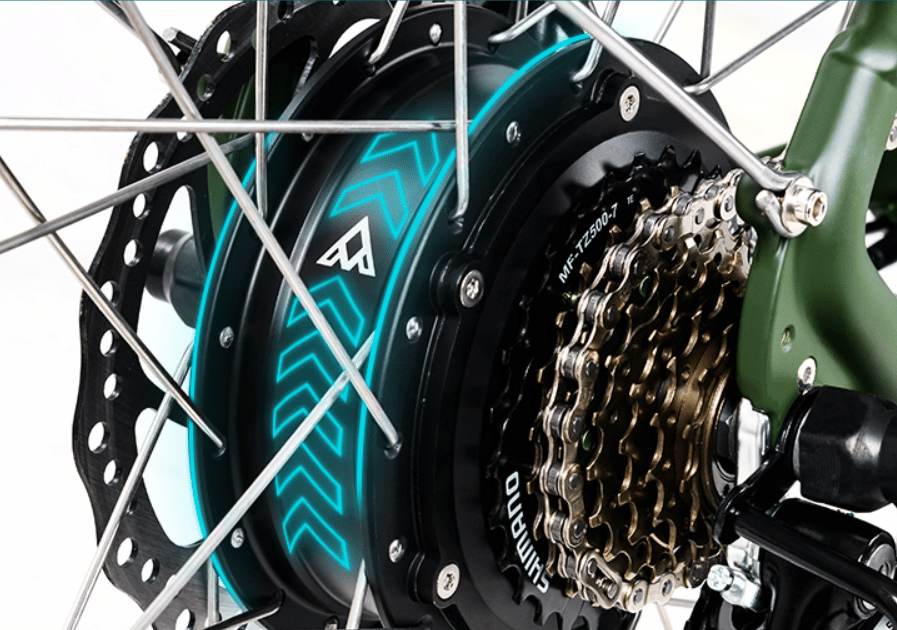 A high peak power output also means you’re able to accelerate pretty fast. There’s practically zero motor latency. The e-bike will snap off the line the second you press the throttle. E-43 and E-55 might come with a 500 W motor, but it feels like it’s 1000 W.

As for the top speed, it tops off at 20 miles per hour. This is standard for all class 2 e-bikes. While this isn’t breakneck speed, it’s perfect for long commutes. With that said, if it wasn’t for the torquey motor, these e-bikes would be pretty dull to ride.

Both e-bikes come with 7 levels of pedal assist. The lower the pedal assist level, the greater the range. But thanks to a beefy battery, you will have plenty of range even at pedal assists set to max.

And if you want to take a break from pedaling, both e-bikes come with a thumb throttle. Just be careful with it. Because the motor is so torquey, you’ll reach max speed in just half a turn.

The motor is controlled by four buttons located on the left handlebar. Bot bikes have a well-lit LCD display that conveys all the riding information you need. The controls take a while to get used to because turning on different features requires different combinations of keypresses. Still, after an hour or so with the bike, the controls will become second nature. 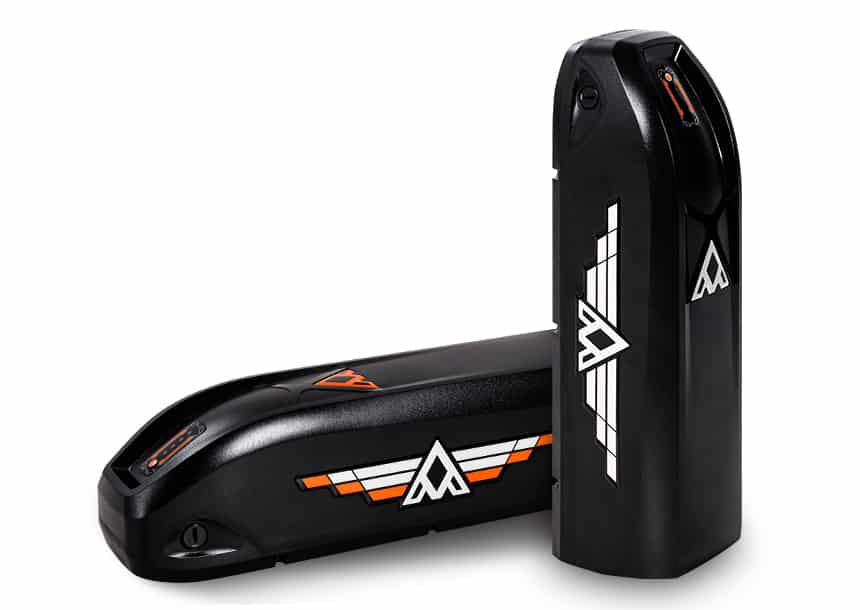 AddmotoR E-43 and E-53 come with a pretty beefy battery. Not only does the battery have a charge capacity of 5000 mAh, but it also has a 3 C discharge current. This is higher than Samsung’s 18650 2600 mAh batteries, whose discharge current is rated at 2 C.

What this all means is that these e-bikes have a pretty long range. According to AddmotoR, on 1st level of pedal-assist, you can get up to 125 miles of range. When you factor in that these e-bikes currently sell for only $1599 (limited time offer), this is more than impressive.

I drove E-43 for a week on the highest level of pedal assist, and I wasn’t able to completely drain the battery.

A large range also means longer recharge time. This is very true for the AddmotoR battery. It took around six and a half hours for the battery to completely recharge. Still, since you’ll be recharging the battery every 10 to 15 days, this is a pretty tolerable recharge time. 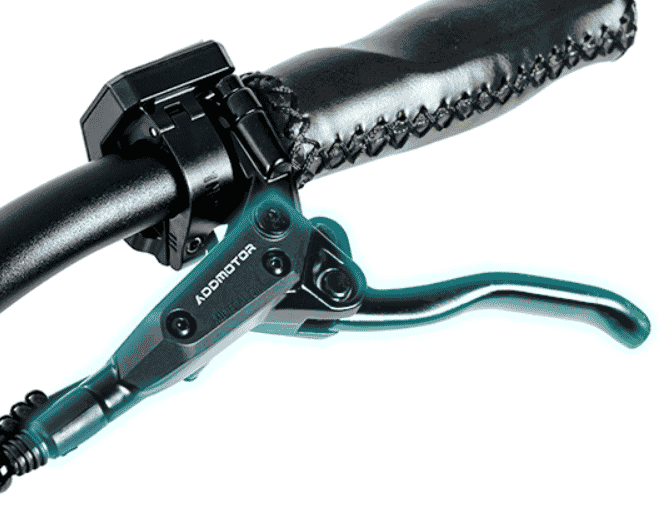 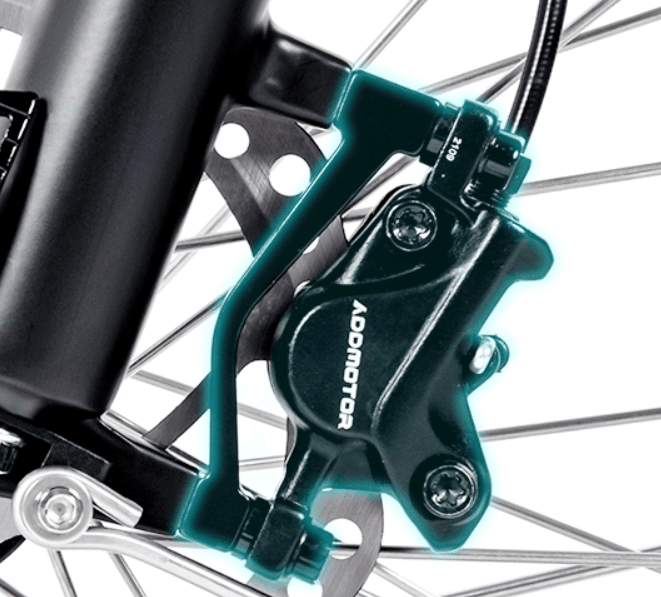 E-43 and E-53 come with 180 mm hydraulic disc brakes. There isn’t much to say about them. They’re pretty solid and will get you to a full stop with a short lever squeeze.

I would even go so far as to say that the brakes are overpowered since the max speed of these e-bikes is just 20 mph. Still, the better your brakes to safer you are on the road since you can stop more quickly.

AddmotoR E-43 and E-53 e-bikes come with double-walled aluminum rims with 12-gauge spokes. The rims are pretty sturdy and will handle city roads like it’s nothing.

The tires are something that really surprised me about these e-bikes. Both come with high-end Kenda GIGAS puncture-resistant tires that feature convex glue thread patterns. This means you won’t lose grip even when it’s raining cats and dogs. The tires are beyond impressive for the price these e-bikes are going for. 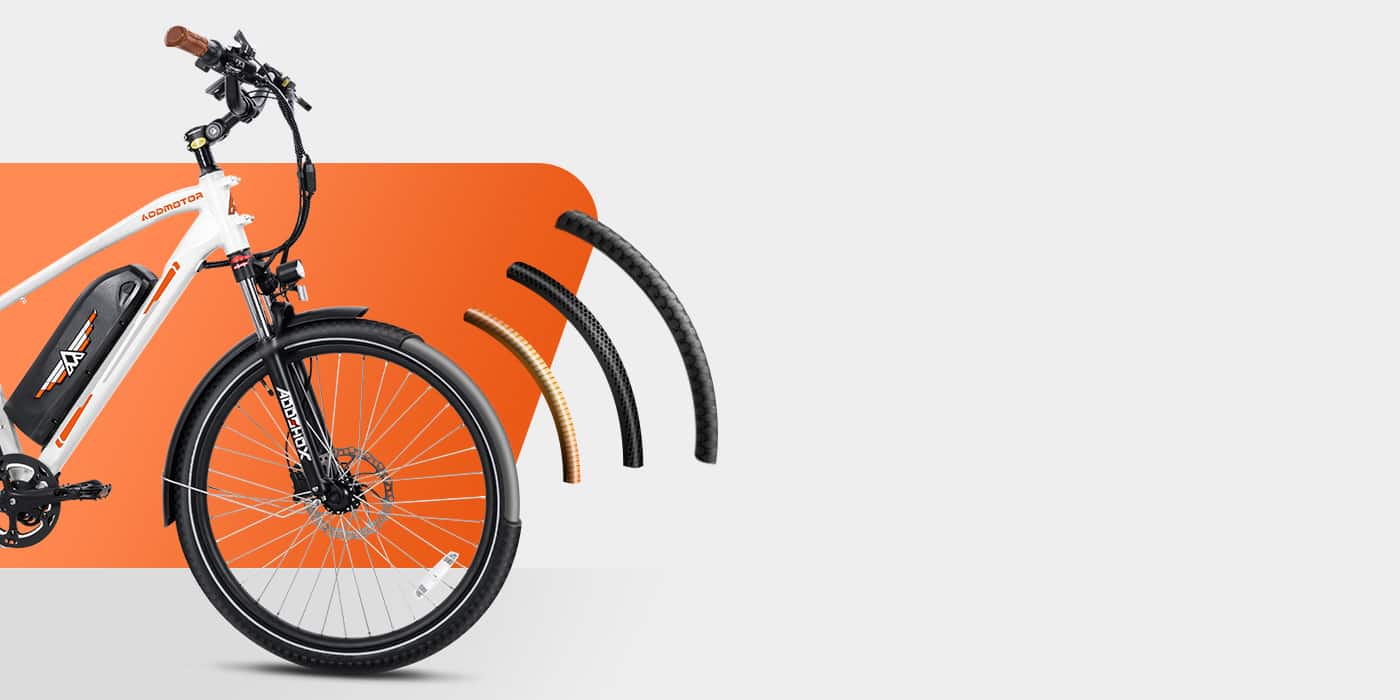 To further drive the point that there is no difference between the E-43 and E-53, here are the key specs for both.

AddmotoR E-43 and E-53 are chock full of features any city commuter should have.

Of course, the feature that helps these e-bikes stand out from the crowd is their incredible range. With around 90 miles of real-world range, these e-bikes are perfect for commuting around town. Sure, the recharge time isn’t that great, but when you consider you’ll be recharging the battery once every two weeks, 6.5 hours of charging ain’t that bad.

Another cool feature is the torqueyness of the motor. While it may be rated to only 500 W, thanks to 907 watts of peak power output, there’s no motor latency. The second you press on the thumb throttle, you’ll be zooming at a top speed of 20 MPH.

Both bikes come with decent LCD displays that deliver all the necessary info about the ride including the pedal assist level, battery level, current speed, and miles traveled.

The only thing that’s holding these bikes back is their price. Both bikes go for $2099. When compared to other bikes in this price range, there are quite a few models that blow them out of the water. However, they’re currently going for $1599, which is a steal.

In conclusion, both E-43 and E-53 Citypro e-bikes are pretty decent commuters. If you’re looking for an e-bike with a large range that’s comfortable to ride, picking up either of the two is a good choice.

I hope AddmotoR keeps these bikes priced at $1599. I don’t recommend you pay full price for these bikes because there are quite a few other e-bike commuters in the same price range that blow these e-bikes away feature-wise.

Hi, I'm Nikola, your typical adrenaline junkie. Columnist and publisher by day, passionate mountain biker, and downhill skateboarder by night (or I guess weekends). I love electric bikes and own a Rad Power Rover 6 myself!