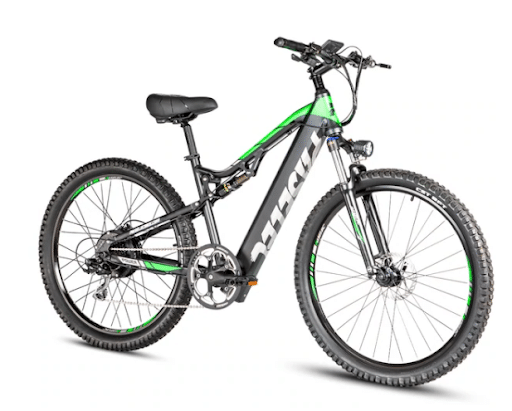 The Paselec GS9 e-bike was supposed to be a full-suspension mountain e-bike that could take you from city roads and up to the mountains - but has, unfortunately, missed that mark by a long shot.

Full-suspension electric mountain bikes are all the rage these days. If you want action-packed, off-road rides, don’t even bother looking into other segments of the e-bike market. It’s just not worth it.

Mountain e-bikes can provide you the comfort and confidence to do stuff you wouldn’t normally do - or even think about doing - on most other types of electric bikes.

But as you know, that kind of performance comes at a certain price tag.

So, I wanted to see what Paselec GS9 - a budget-friendly mountain e-bike that costs two to four times less than a typical full-suspension electric bike - compares to the pricier versions.

And right off the bat, I have to admit:

The price difference is evident in certain aspects of its performance and components - although I agree that it still gets the job done. I’m not sure that’s what Paselec was going for, though.

Let’s look at the specs of the Paselec GS9 first - and then review each part of this affordable full-suspension electric mountain bike.

The first thing I’d like to mention here is the frame of the Palesec GS9. The e-bike’s constructed out of 6061 aluminum. There’s nothing special to talk about here - decent quality material for the frame; that’s all I’ve got to say. 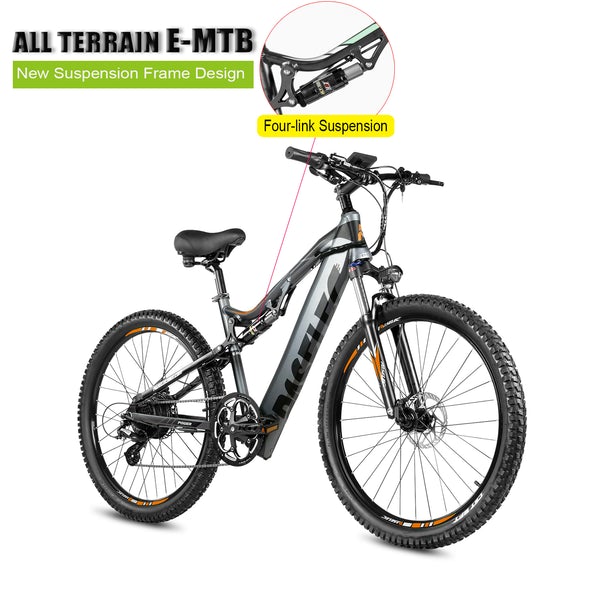 I should warn you, though - it weighs just over 70 pounds!

Given that it’s a mountain bike, it has decent quality front and rear suspension, though not good enough for crazy jumps and challenging terrain.

When it comes to overall quality, the Paselec GS9 is a value electric bike, so it does make a few compromises. The suspension is far from top-notch - but it beats not having any suspension at all. The seat features extra padding, which is a definite plus for a smoother ride.

Where’s the battery, though?

Well, it’s hidden in the downtube; Paselec GS9 solved - or, at least, tried to solve - the issue of a built-in battery by making the battery pack removable. I appreciate the effort, although the entire process can be a hassle.

It’s an improvement upon battery packs that are straight-up integrated into the down tube of the frame - but it’s kind of a weird way to pull the battery out.

Also, another minor complaint I have is that it doesn’t feature a water bottle holder. One would assume that that’s a standard feature on most modern-day bikes - but I guess not. So, that’s a bummer. 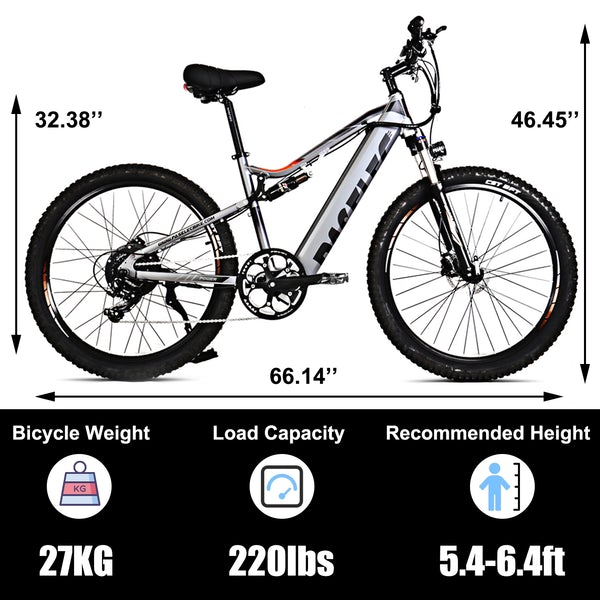 The Paselec GS9 has a rear 750W motor, so it’s far from a weak or underpowered electric bike. With that said, it doesn’t pack the same amounts of power that some top-tier electric bikes do - and that becomes apparent on more challenging terrain.

It reaches speeds of around 25mph, and it’s pretty fun to ride. And unlike some budget electric bikes, it doesn’t feel like it’s about to fall apart when you reach the top speed; Paselec deserves some bonus points for that.

It features five levels of pedal assist and throttle-only mode, in addition to the nine gears on the Shimano transmission. 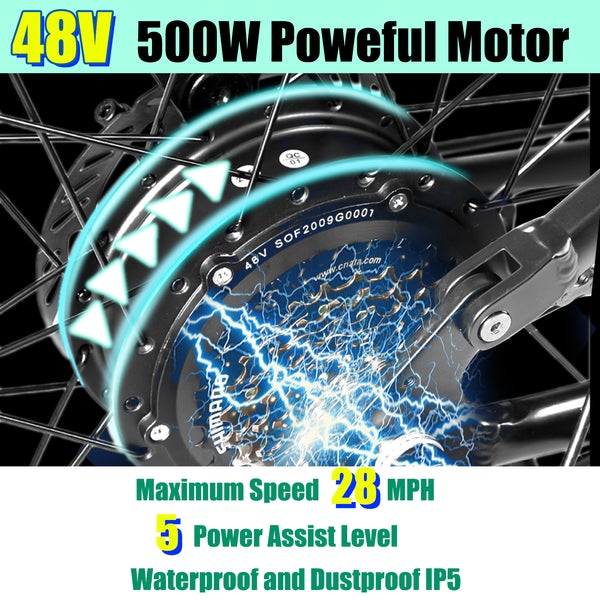 That all sounds great on paper - but in reality, the Paselec is slow to reach its max speed. Then again, it does feature cadence-based pedal assist, so you can’t expect the responsiveness of a real torque sensor.

You know I’m all for the sleek look of integrated batteries. But at the same time, one has to take other things into consideration - mainly scenarios where you need to remove the excess weight to carry your bike.

Paselec’s GS9 tries to address both:

On the one hand, it doesn’t even look like an e-bike, thanks to the integrated battery. It’s hidden in the downtube, meaning it’s not a dead giveaway of an e-bike. But on the other, it allows you to remove it - although the process is a bit of a hassle.

Now, for the performance:

The battery is a 48V 14.5Ah, making it decent - but not particularly big. So, try not to overdo the throttle.

The company claims that the Pasalec GS9 has a max range of up to 45 miles on a charge, but I strongly disagree with these claims. Realistically, you’re looking at 20 miles on the throttle or 30 or so miles with Level 1 pedal assist.

The Paselec GS9 comes with Zoom hydraulic disc brakes with 180mm wear-resistant rotors. There’s honestly not much to say about them. All in all, these are decent-quality brakes that allow convenient one-finger braking - although I probably wouldn’t test their capabilities in any challenging conditions.

The Paselec GS9 comes with all-terrain 26x4-inch fat tires. While these are decent for mid-level riding, they aren’t a match for top-tier electric mountain bikes capable of resisting impacts and - well, doing what mountain bikes do best. 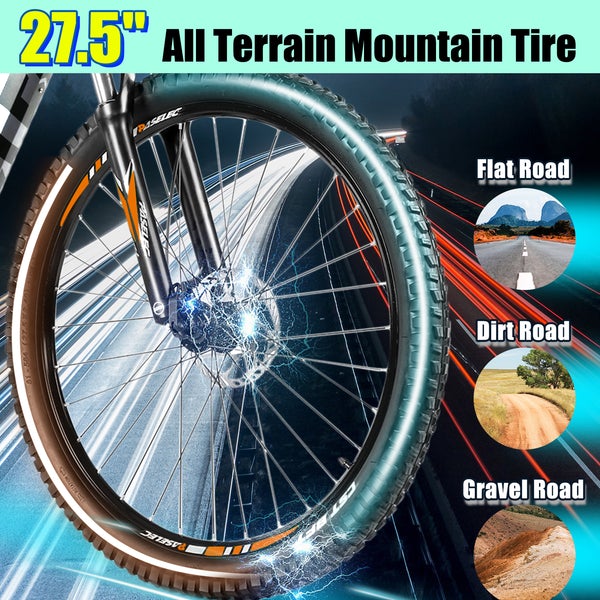 For $1400, this mountain electric bike is a steal when you consider everything - the good and the bad.

The Paselec GS9 is decently built for some mid-level performance. Believe me, I tested some flat-out cheap mountain electric bikes, and this one doesn’t scream cheap or poorly made. But as I’m sure I’ve made it clear by now, it does come with some notable cons.

This e-bike certainly doesn’t match the high-end mountain electric bikes I’ve ridden; comparing it to some high-end models would be a “night and day” type of comparison. Instead, this bike is a compromise - and a decently thought out one at best.

You’re getting a reasonable mountain electric bike at a reasonable price - nothing mind-blowing or out of this world, that’s for sure.

Granted, the Paselec GS9 is marginally better than extremely cheap electric bikes. You can do things that you wouldn’t dare do on a much cheaper e-bike. But would I say it’s the best in its price range?

The Paselec GS9 is an electric mountain bike meant for recreational riders. It’s intended to be a value e-bike - and when it comes to casual use, sure, it gets the job done.

For me, this is the kind of e-bike that you could take on a dirt road every now and then and have some fun. It gives you just enough of what a weekend warrior might need - and does so at such a reasonable price.

The Paselec GS9’s design, while simple and sleek, features some rather unusual components. For example, while not entirely integrated into the downtube of the frame, the battery pack can still be removed - albeit with a bit of a hassle.

Now, that sounds great in theory - but:

The lock for the battery is located at the bottom of the downtube, and it drops right out as soon as you turn the key - but the whole battery removal process is somewhat tricky and weird. You would have to lift the bike or put it sideways to get the battery pack out; that’s how long it is.

The range is another thing that left me wanting more. The company claims that the GS9 has a max range of 45 miles. However, after riding it, I’d say the more realistic max range is 20 miles with the throttle - and about 30 miles with pedal assist.

I never came even remotely close to the advertised 50-mile range.

The Paselec GS9 is a decent electric mountain bike that gets the job done. You can enjoy some recreational off-road riding - but nothing more than that.

The Paselec GS9 is a pretty affordable e-bike; I’ll give it that. However, it’s still miles away from the best budget-friendly electric mountain bikes - and that becomes even more apparent when you dare to take it out for some more advanced-level off-roading.

The Paselec GS9 is a decent option for recreational riding - but, again, it compromises some of its quality for the sake of budget-friendliness. At times, those compromises become too hard to ignore.

Honestly, there are much better options - even at a similar price point.