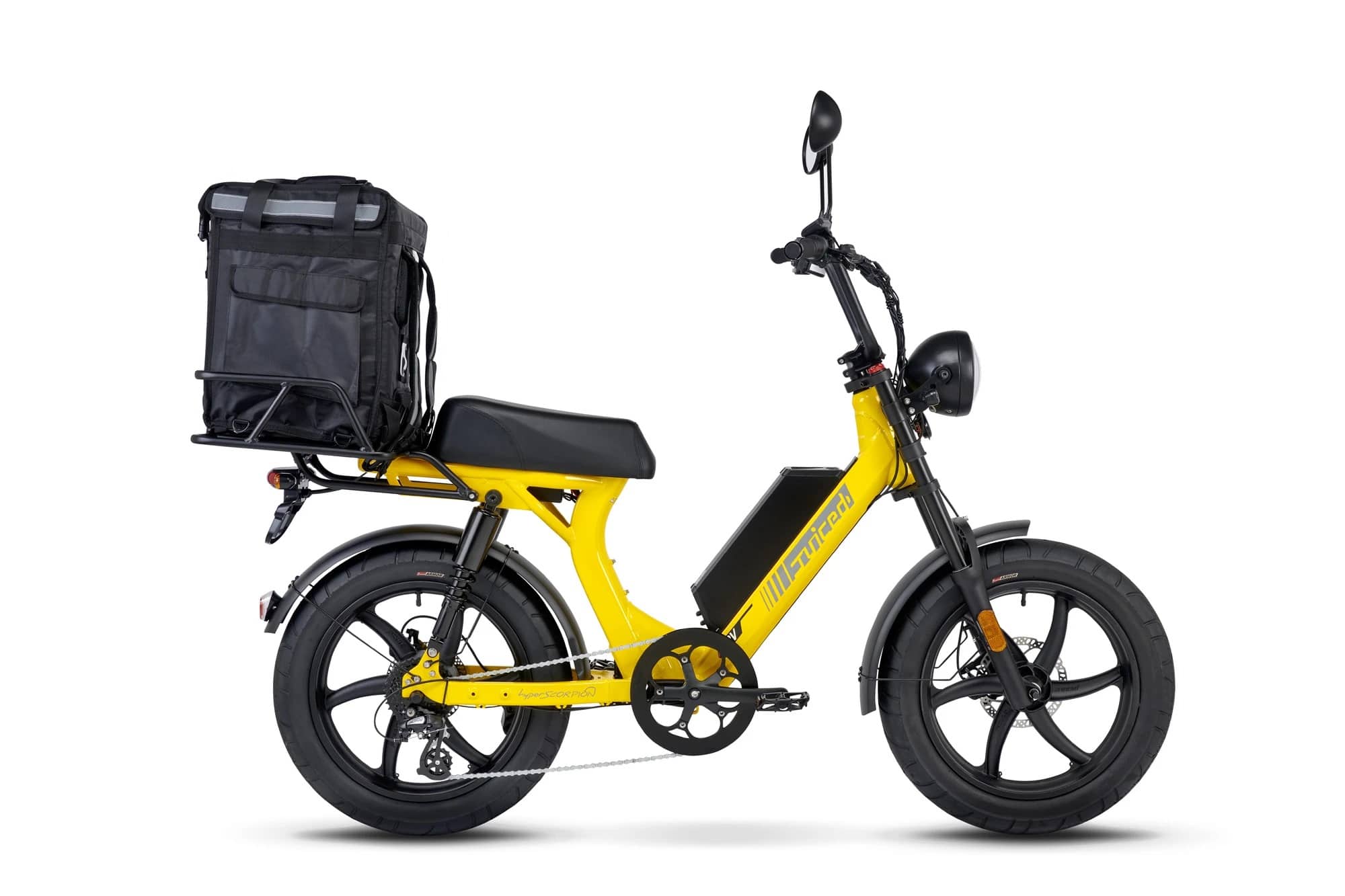 Eco-friendly bike down for anything, even delivery

The Scorpion and HyperScorpion Express overview 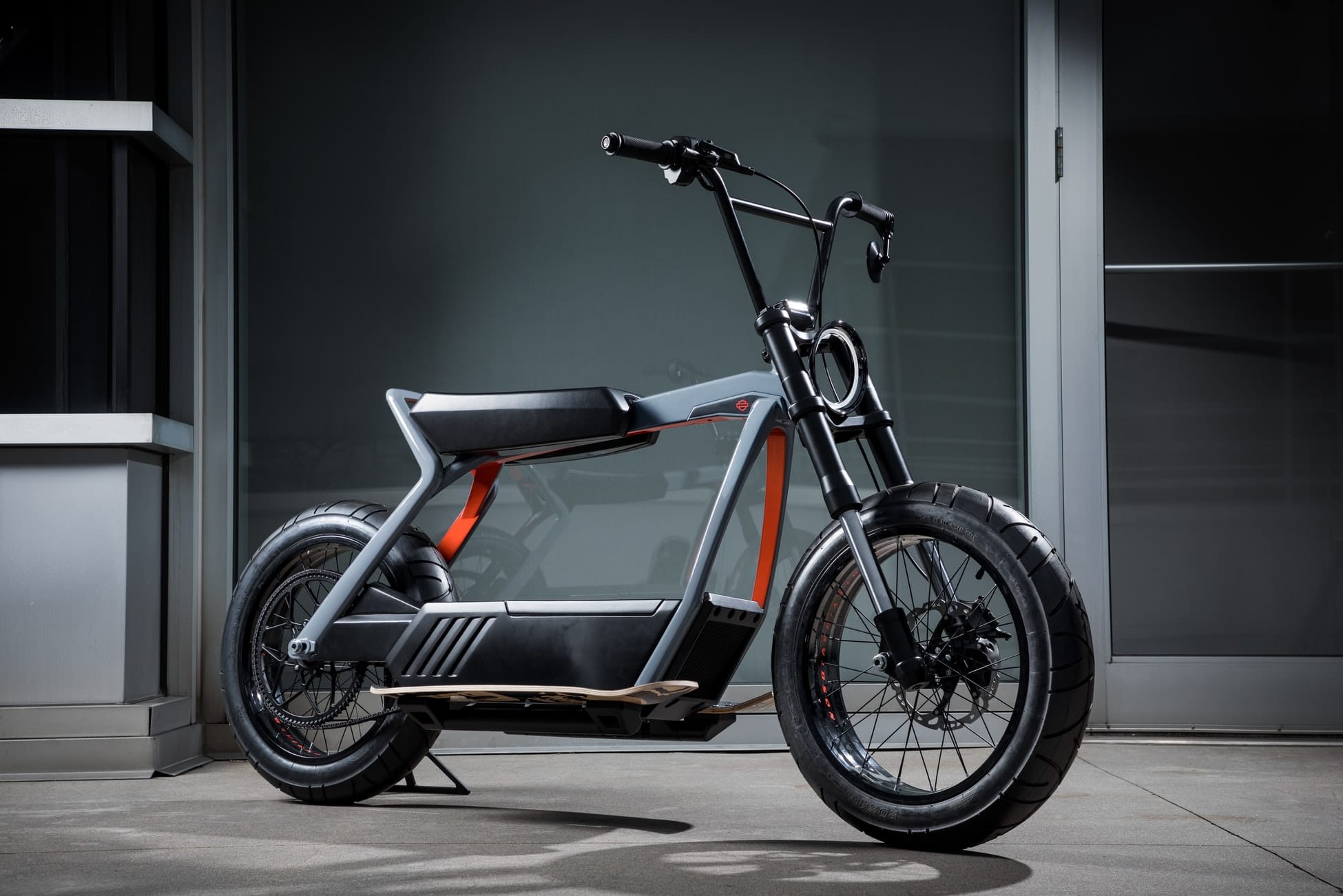 Bicycle lovers and enthusiasts embraced the invention of electric bikes.

On the other hand, motorbike lovers weren’t exactly happy when they saw that cyclists got an e-version, while they felt they needed an eco version as well.

Juiced Bikes came through with their Scorpion and the HyperScorpion Express!

The bikes themselves are rather distinguished among themselves - you can think of the Scorpion as the basic type, while the HyperScorpion Express is more of an updated version.

The Scorpion is a decent electrical ride, with a price of $1,499 it falls into the category of bikes that won’t break the bank.

While the HyperScorpion Express’ specs go through the roof, it comes with an accompanying price of $2,299 - a lot higher, you’ll agree. Of course, the Hyper version offers more than the basic one, so there’s that.

Even at the first glance, it’s easy to spot the differences between the two. The Scorpion is designed to keep up with commutes and errands - all daily activities while it doesn’t lose on comfort.

On the other hand, the HyperScorpion Express is more versatile as it can withstand all kinds of rides and uses.

Both electrical vehicles come with a back rack and fenders. The HyperScorpion can even be used as a delivery vehicle or for some medium-distance traveling since the back rack can fit a smaller suitcase or a large duffle bag.

The fork on each frame is a hydraulic lockout type. It’s decent enough but it doesn’t offer the safety a suspension fork can, for example. For a budget vehicle, that’s fine, but the HyperScorpion could benefit from a higher-quality fork.

Since these aren’t exactly the conventional electric bicycles, but more of a motorbike-style e-bike, they tend to be a bit heavier.

That means they require a powerful set of brakes, and Juiced Bikes didn’t disappoint with this spec. Each bike has a set of 180mm hydraulic disc brakes, so safety and strong braking are never in question with these.

When we’re talking about vehicles that serve as a daily commute - comfort is one of the most important things. Comfort starts with quality tires, that absorb the vibrations from the pavement as well as some smaller potholes.

The Scorpion and the updated version of it are equipped with extra-large, 20” x 4” puncture-resistant tires, so even riding country roads is an option.

The engine on each of these is different - the Scorpion has a 750-Watt hub motor with a top speed of 28 mph - a speed over the industry average.

On the other hand, the HyperScorpion Express is equipped with a powerful, 1000-Watt retro blade motor which can reach 30+ mph.

Both electric motorbikes have Shimano transmission - the Scorpion has a 7 gear, while the HyperScorpion has an 8 gear shifter. The throttle is twist-activated, so you get the full experience of riding a motorcycle.

The basic type, the Scorpio has a range of 45+ miles, which is a little more than the average in the electric biking world. The HyperScorpion Express is powered by a large battery, so it has a range of 70+ miles.

Talking about these two electric motorbikes and why they are a great buy is not enough - it’s best to check out the specs and see for yourself! 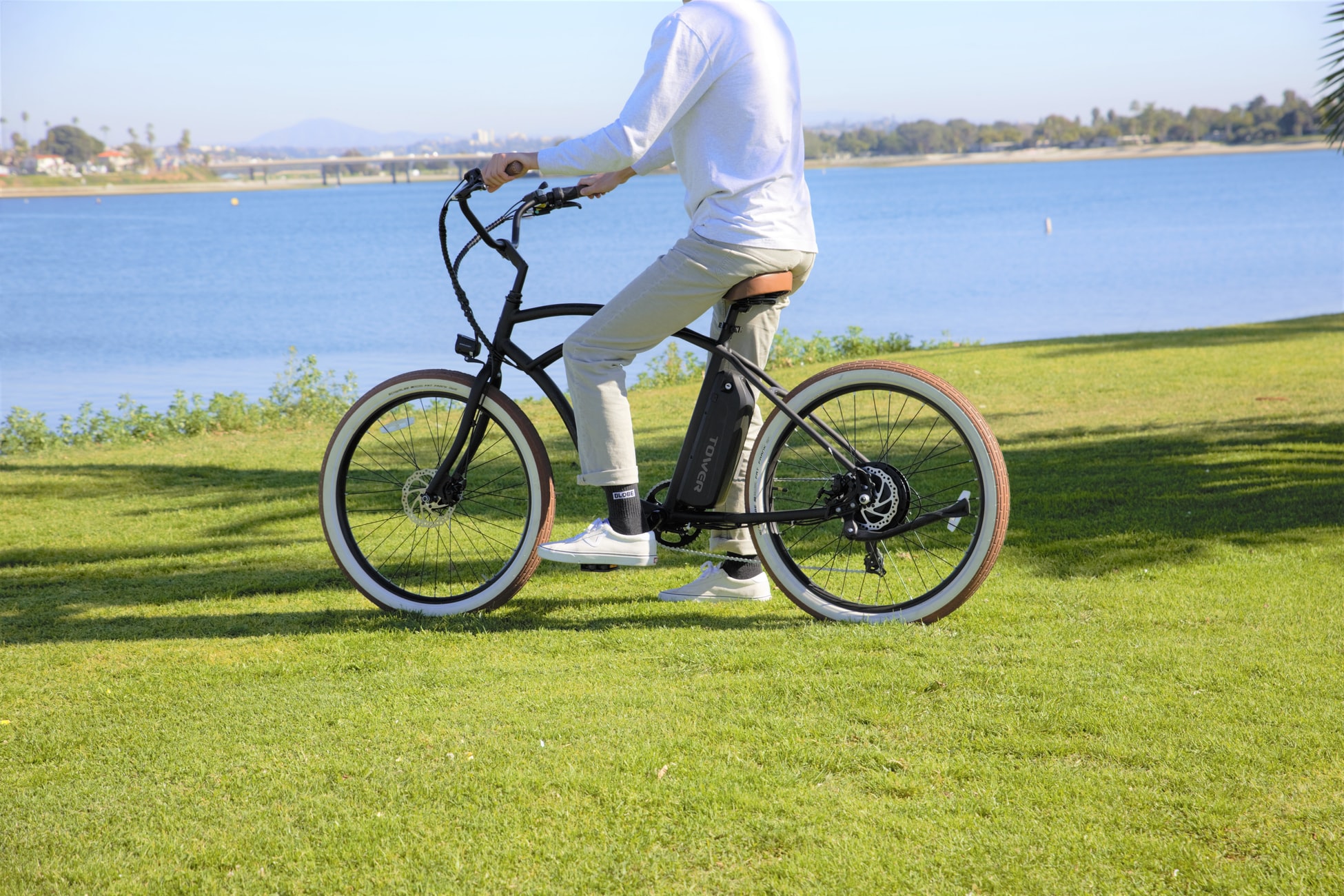 For some bikes, customization is endless. When you’re opting for the Scorpion, you can choose it in the elegant black or the fantastic blue - while the HyperScorpion is only available in the color yellow.

One of the top features of the Scorpion and its updated version is comfort.

There is no good bike without comfort, and it’s obvious Juiced Bikes knew this when designing these juicy models!

The LCD is tiny and very user-friendly. The controls are simple, so even if you’re a rookie in the e-bike world, you’ll have no trouble managing.

There are five pedal-assistance modes: 1, 2, 3, Race, and Sport. Modes 1, 2, 3 are used to control the motor assistance when pedaling, with 1 being the lowest.

The Race mode is offering maximum torque, and the Sport mode will reach the speeds you preset in mere seconds.

One of the flaws of these bikes would be the charge time, which can take as long as 7 hours. If that seems like too long, you can invest in a fast charger, which shortens the charge time to 2 hours.

Both bikes come with a back rack and fenders, which you either need or you don’t.

If they seem useless to you, you can change it for a passenger seat easily. If you’re looking for some over-the-top range, the HyperScorpion Express delivers every time. 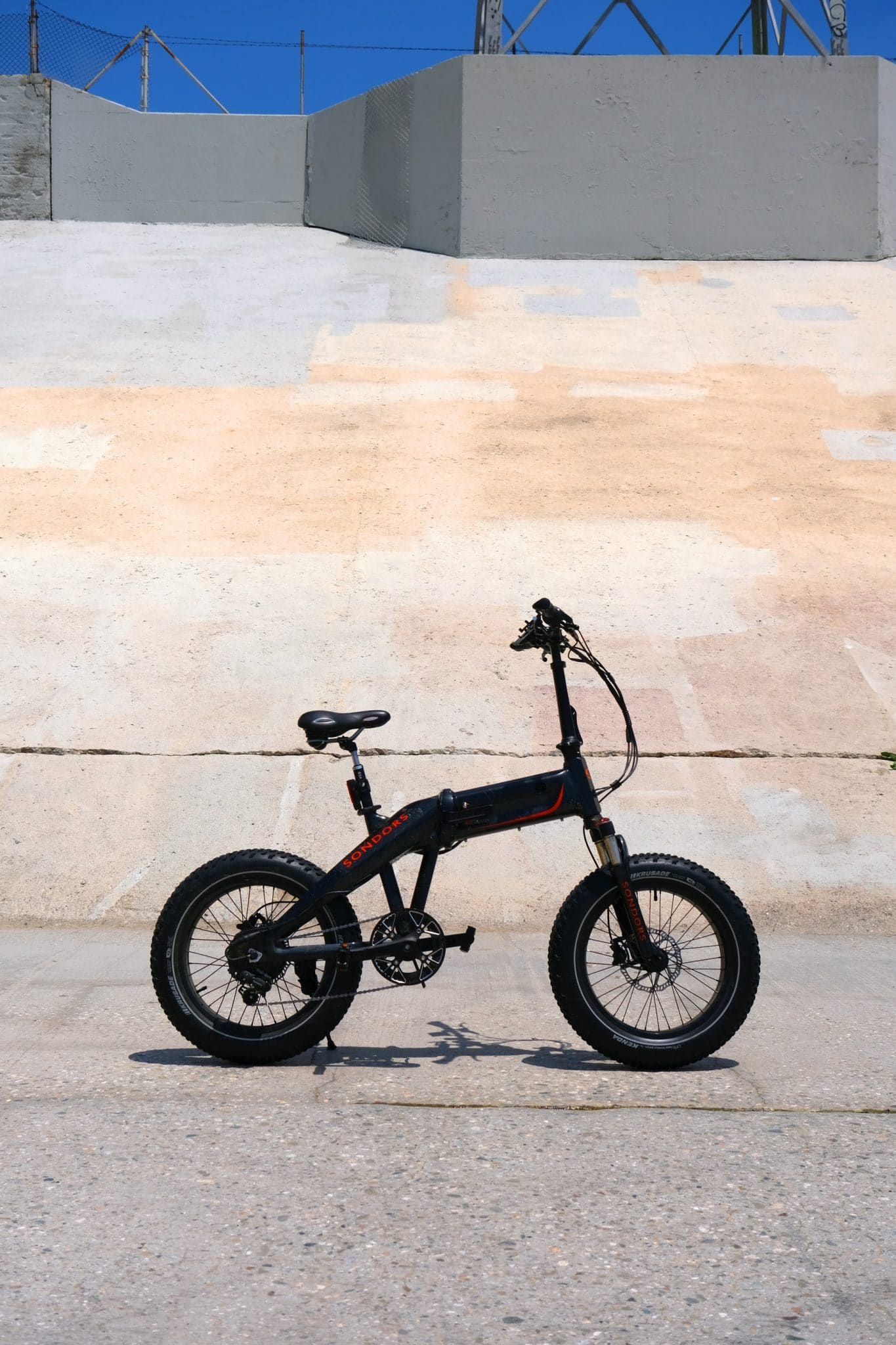 To conclude, reasons for buying any of these bikes can vary on your needs and your budget. If you need a budget-friendly, affordable bike, definitely pick the Scorpion.

It offers a decent range with a moderately powerful motor that reaches a top speed of 28 mph. It offers a comfortable, safe ride, and the HyperScorpion can be used for any type of ride - be that commutes or light traveling. If you’re looking for more than that - consider investing $800 more towards the HyperScorpion Express.

The bikes are trendy and they are a great accessory for any lifestyle. Being eco-friendly is a good look on anyone, while the specs of these e-bikes are blowing the competition when comparing the price.

Ofcourse, you can always check out our Juiced Bikes All-in-One review, where we take a look at and compare many different JuicedBikes Models.

If the deciding factor is the price tag on the e-bike - go for the Scorpion, without a doubt. And if you need a bike that has an astonishing range and a top speed that will blow you away, the HyperScorpion is your choice! 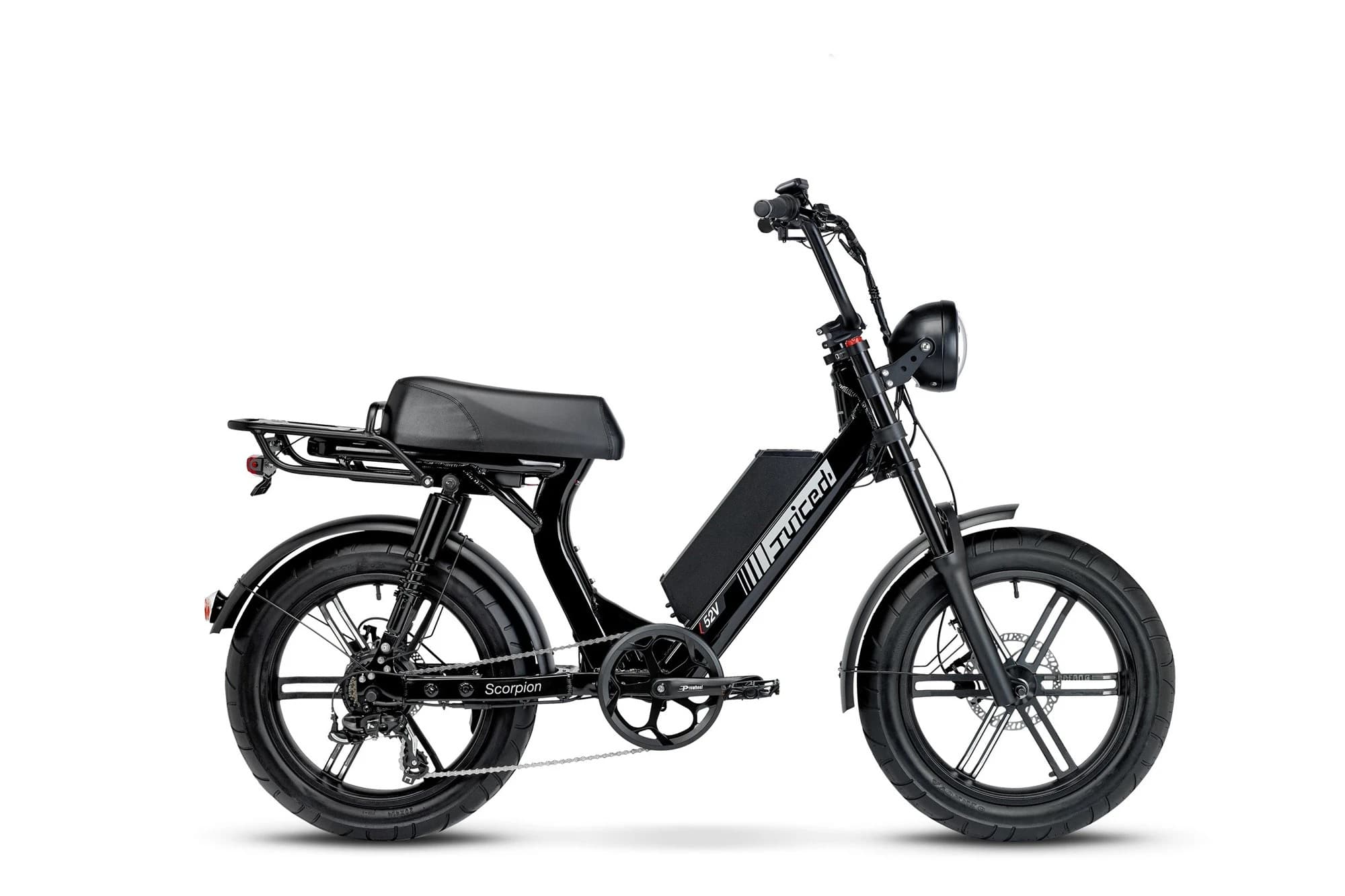