Speedrid Electric Bike – Budget Ebike we DO NOT recommend 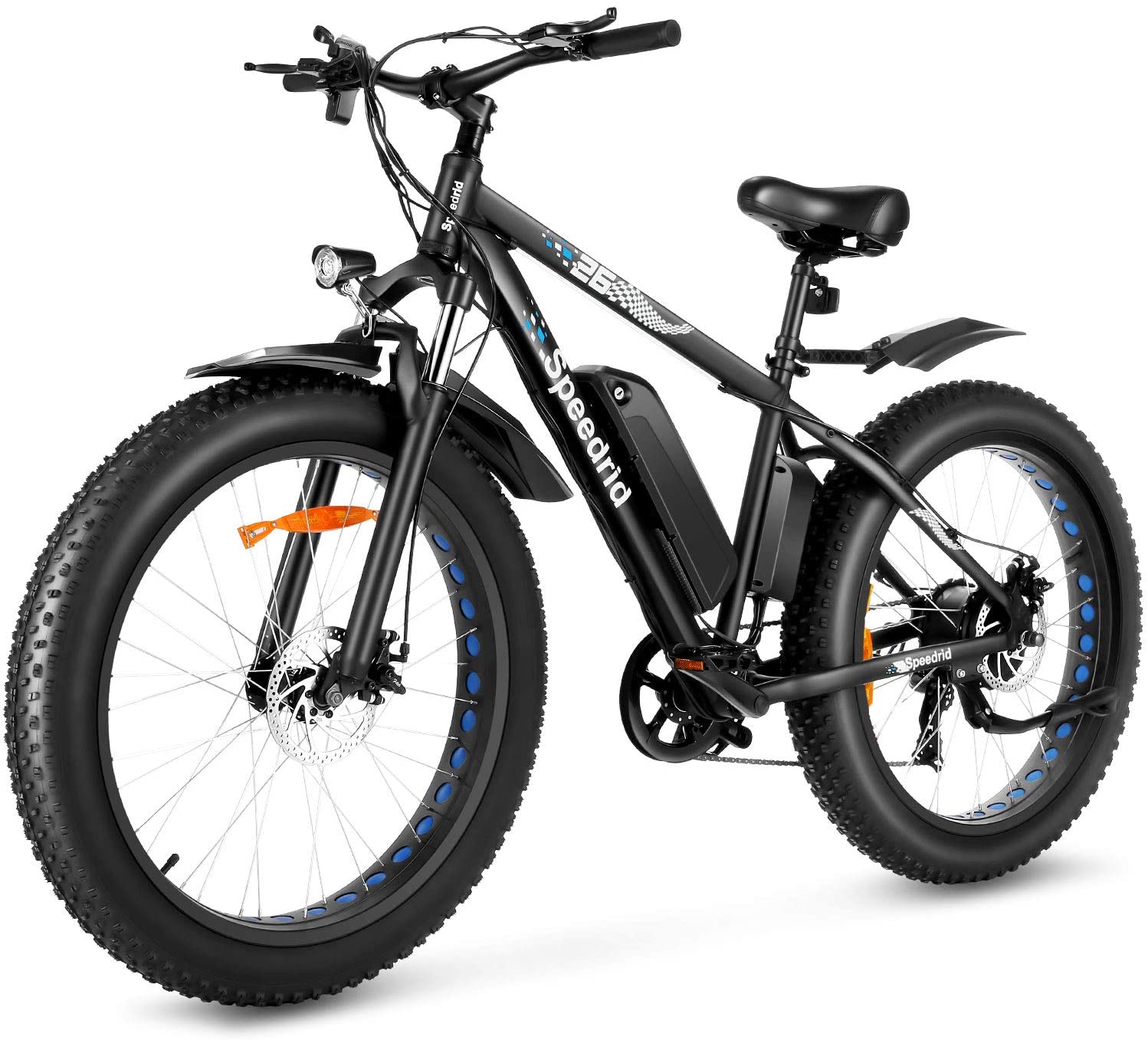 From janky battery placement to low-quality handlebars, the Speedrid 26 e-bike is one of the lowest-rated e-bikes you can find on Amazon.

Most e-bikes we review on this site have one thing in common - they’re not the cheapest. And that’s for a good reason. When building a decent e-bike, you can’t afford to skimp on materials. 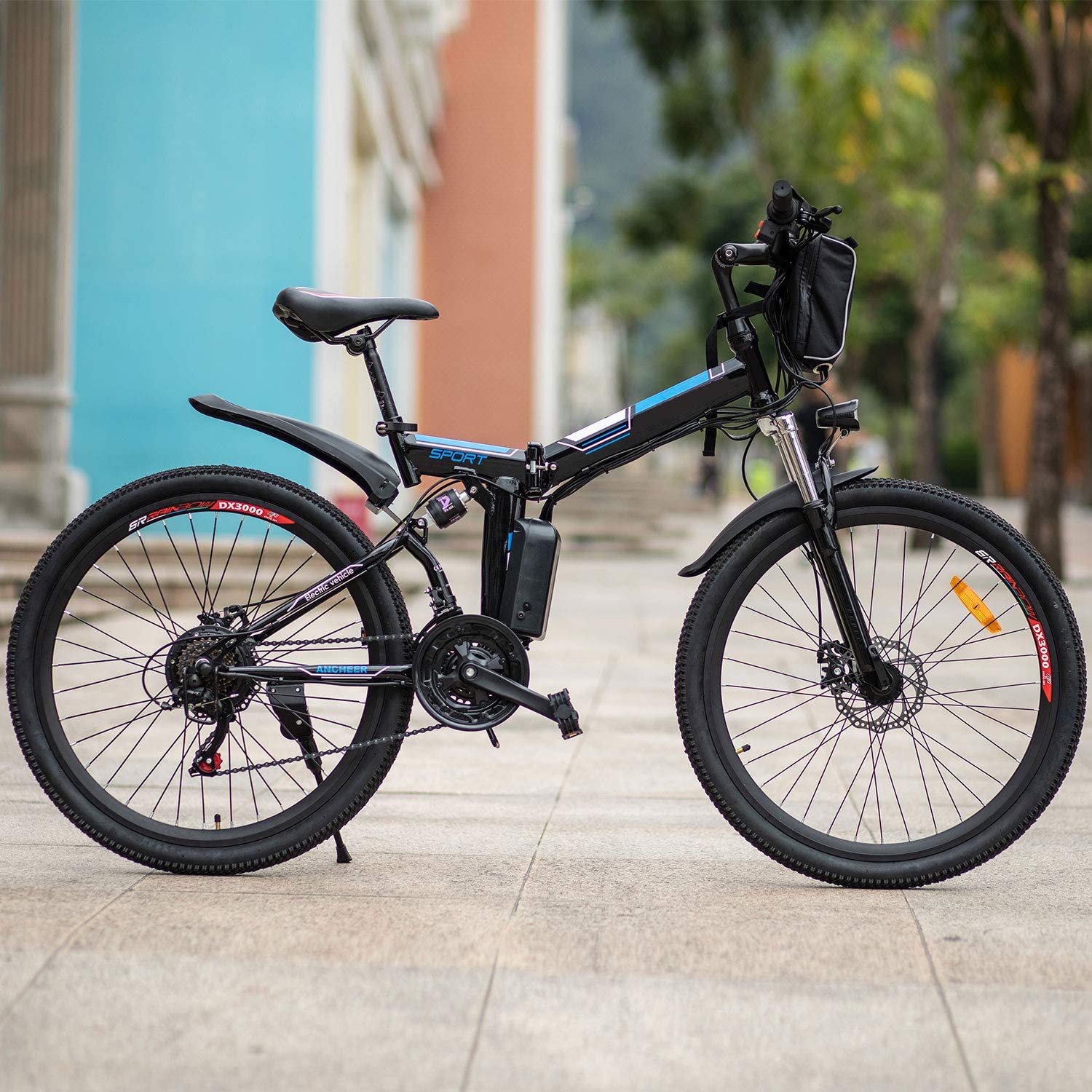 Now, keep in mind, e-bikes are meant to be ridden daily, and they’re far from being lightweight as most “regular” bikes. That is why you need to build them from quality materials, which don’t come cheap.

Today, we’ll be reviewing one of the worst e-bikes you can find on Amazon - the Speedrid 26. Take this article as a case study of what not to look for when looking for an affordable electric bike.

Let’s look at the specs first.

Even on paper, the Speedrid isn’t anything special. Sure, it does come with disc brakes and has tires that are (at least on paper) good for off-road trails. However, things get much worse as you go beyond just mere specs.

One of the things you’ll notice about the Speedrid is that it has a relatively cool-looking frame. It comes with double suspension and is foldable.

While someone who’s not experienced with electric bikes, and mountain bikes, in general, might find this appealing - it’s actually a huge red flag.

Mountain biking involves riding over incredibly bumpy tracks, which, in turn, causes quite a bit of stress on the bike frame. That’s why you want it to have as few “failure points” as possible. But it seems that Speedrid decided to throw this “rule” out of the window and included not one but four potential failure points.

The first failure point is the folding latch. You don’t want to use a foldable bike on an offroad trail unless you’ve bought a bike that’s $2000 plus. Don’t get us wrong, having the ability to fold the bike in half is fantastic if you want to take it with you - but it’s never a wise choice on an MTB.

The other three failure unnecessary failure points all involve the back suspension.

You see, the rear shock absorber is located right below the seat and connects the downtube to the back end of the bike. And to make things even worse, the mounts are terribly welded.

That means that if you took this bike to any medium off-road track, the mounts would break after just a couple of miles.

On top of that, since the seat tube is located right above the rear shock absorber, you can easily damage them both if you hit a particularly nasty bump or hole.

And as a cherry on top, the suspension’s incredibly stiff, making the riding experience marginally intolerable.

I’m also not too fond of the cable management on the Speedrid.

Righ above the pedals, there’s a large cable box that houses sensors and other vital electricals. The box is built out of cheap plastic that’s unable to handle too much wear and tear. All it takes is one bump - and you’ll end up with exposed electricals.

Although the handlebar is adjustable, it’s low quality - just like the rest of this bike. We managed to break the left handle after just 50 miles during our testing!

We hope the guarantee covers it - but we’re still waiting to hear from the Speedrid sales team.

It looks like the plastic fenders this bike comes with aren’t even designed for it. They rub against the tires - producing terrible noise and wearing down the tires themselves. We removed them to prevent any further damage.

Lastly, we have to talk about the transmission system.

You see, Speedrid comes with a 21-speed SShimano transmission system. And no, that wasn’t a typo; it’s a knockoff and a terrible, cheaply made one at that. The system produces intolerable noise unless you set it to a specific speed. In our case, it was the 6th.

For a bike that costs around $600, we’re surprised it comes with a 250W rear hub motor. 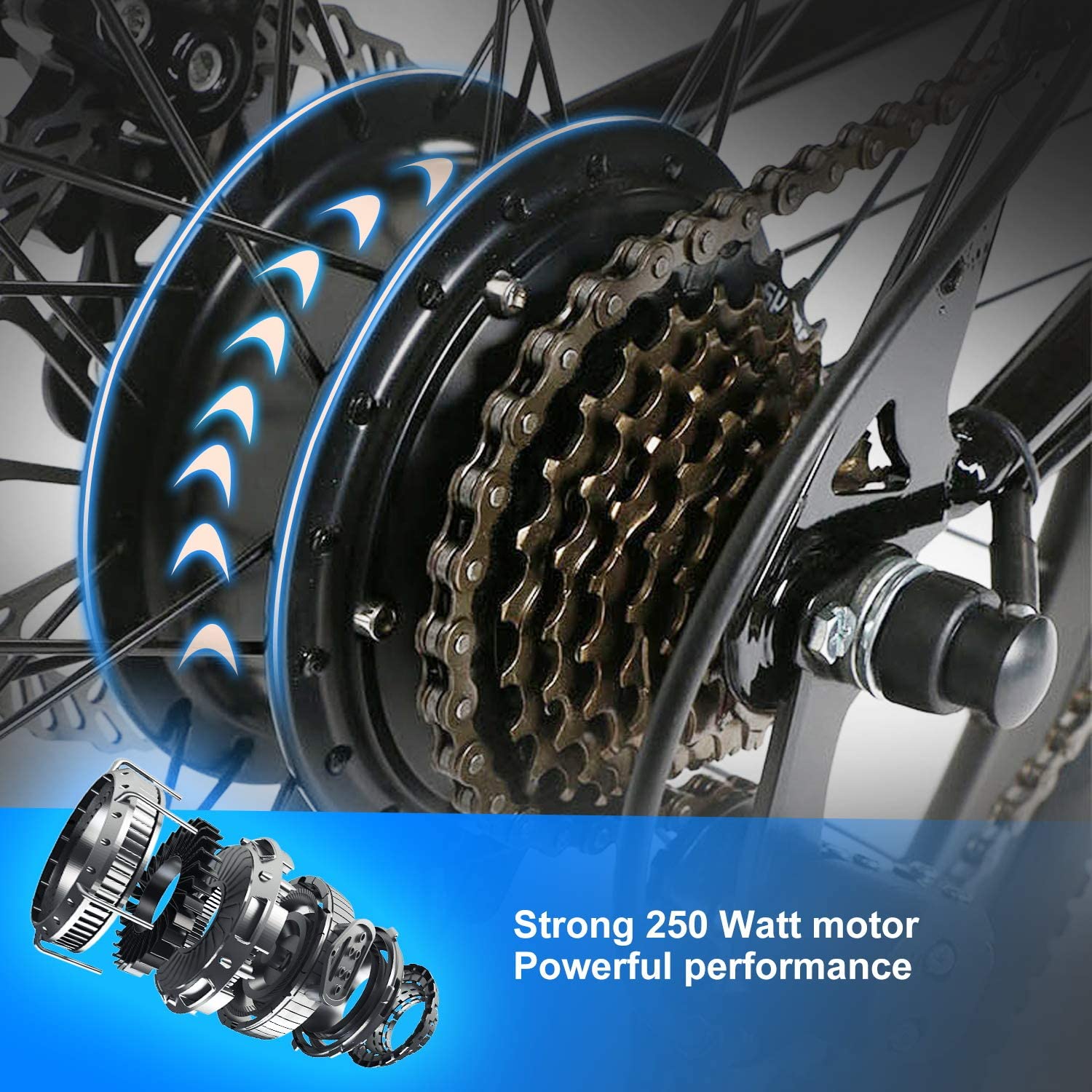 The motor works fine. However, it’s slow as a snail. Unless you’re riding on perfectly flat terrain with the battery fully charged, you’ll be lucky if you went over 15 miles per hour.

And since this e-bike weighs around 56 pounds, you’ll need that motor - because riding the bike without pedal assist is a nightmare.

The motor controller is located on the left side of the handlebar and is incredibly basic. The guys at Speedrid tried to cut as many corners as possible, which is why the controller doesn’t come with even a basic LCD screen. Instead, you have LED indicators for the battery and pedal assist levels.

Besides the indicators, you get three buttons for turning on and adjusting the bike’s pedal assist level. That’s as basic as it gets.

We don’t recommend you ride this bike on lower levels of pedal assist because Levels 1 and 2 don’t seem to do anything. And with Level 3 active, you’ll be lucky to get even 10 miles of range. Unless you’re under 90 pounds, don’t expect this e-bike to take you far.

Speedrid also advertises this e-bike comes with a throttle. That’s a lie; the throttle is nowhere to be found.

And even if this e-bike did come with a throttle, we’re pretty sure that would only cut down the already limited range even more.

The Speedrid e-bike comes with a tiny 8 Ah battery. With so little charge, it’s a wonder you even get 15 miles of range (on perfectly flat ground, that is).

The battery is of terribly low quality, and we’ve seen many people complaining about how it died after just a couple of charges. Thankfully, the battery is covered by the warranty, so if it fails, you can send it back to get a new one.

The worst thing about this battery isn’t its quality, though, but its mounting system.

While most e-bike batteries have some kind of mounting system that will keep them secure and theft-proof, the case is entirely different with Speedrid:

The battery on this e-bike is held in place by a polyester bag, and not a good one, either. What’s more, someone could steal it in mere seconds.

This e-bike comes with 180-millimeter disc brakes by SShimano - the same knockoff company that built the transmission system. And as we suspected, the brakes were just as terrible as the transmission, maybe even worse.

Out of the box, the brakes are assembled so that they actually rub against the frame. That not only damages it but also produces terrible noise.

Thankfully, we managed to fix that problem quite quickly.

As for stopping performance, even under perfect conditions, these brakes aren’t very good. It takes quite a lot until you go to a complete stop. They’re also not very responsive - which is an issue on an MTB. 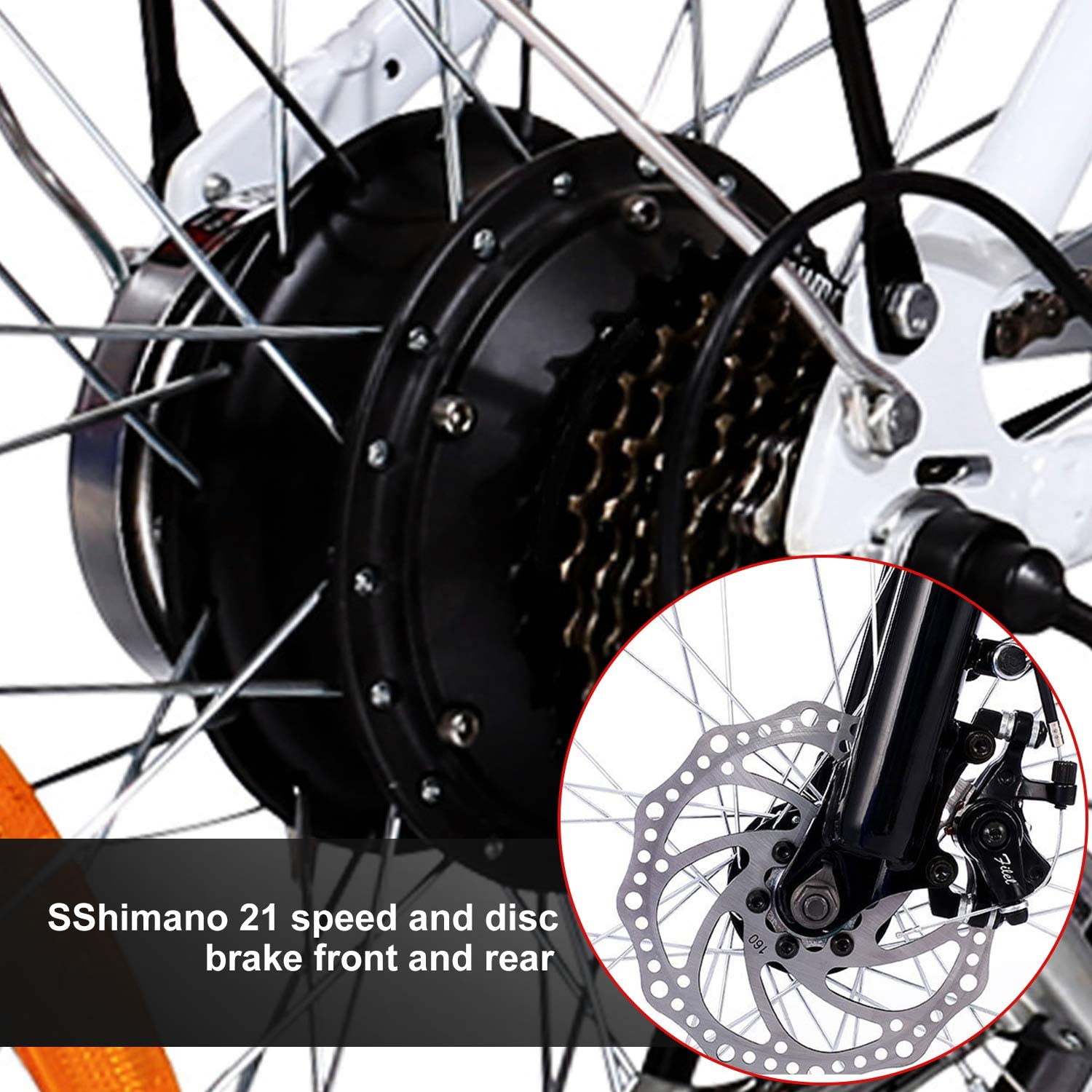 The only thing we don’t have an issue with on this bike are the wheels.

They’re built out of double-walled aluminum and are decent for what they are. We wouldn’t trust the rims on a medium-difficulty mountain track, but they perform just fine for light offroading and commuting around town.

This e-bike features 26 x 2.25-inch tires. Unfortunately, they’re not of the highest quality. They’re too soft for a heavy bike like this one.

Without a doubt, you’ll have to switch them out after just one year - which brings about another issue:

Since the motor is hardwired with the wire-box on the downtube, switching tires on this e-bike is a nightmare.

Speedrid Foldable eMTB is a cautionary tale of what not to look for in a cheap e-bike. As you’re likely aware by now, just about everything on this bike is terrible. We’re genuinely surprised how Speedrid managed to sell a single unit.

Everything from the frame and handlebars to brakes and transmission feels off and flimsy.

If you’re short on cash and want to get a cheap e-bike, that’s perfectly fine, but please read the reviews. Don’t get an affordable e-bike on a whim - because you might end up with a Speedrid eMTB on your hands.

The rims are the only thing we have no qualm about on this bike. That’s because they’re already cheap to produce; they couldn’t cut any corners there.

If you’re looking for a cheap e-bike, we recommend you do a lot of research. Before making the decision, we highly recommend reading both professional and user reviews. If there’s even a single thing that feels fishy about the e-bike, avoid it and look for another one.

We’ve recently done a round-up where we reviewed the top 8 best electric bikes under $1000 you can use as a good jumping-off point. Who knows, maybe one of the e-bikes we reviewed there might catch your eye!

To tell you the truth, Speedrid is everything you don’t want in an electric bike.

Not only is it slow and has terrible range, but it’s shoddily built and feels like it would fall apart before you know it. There are quite a few cheap e-bikes out there that are worth your money - but the Speedrid isn’t one of them. 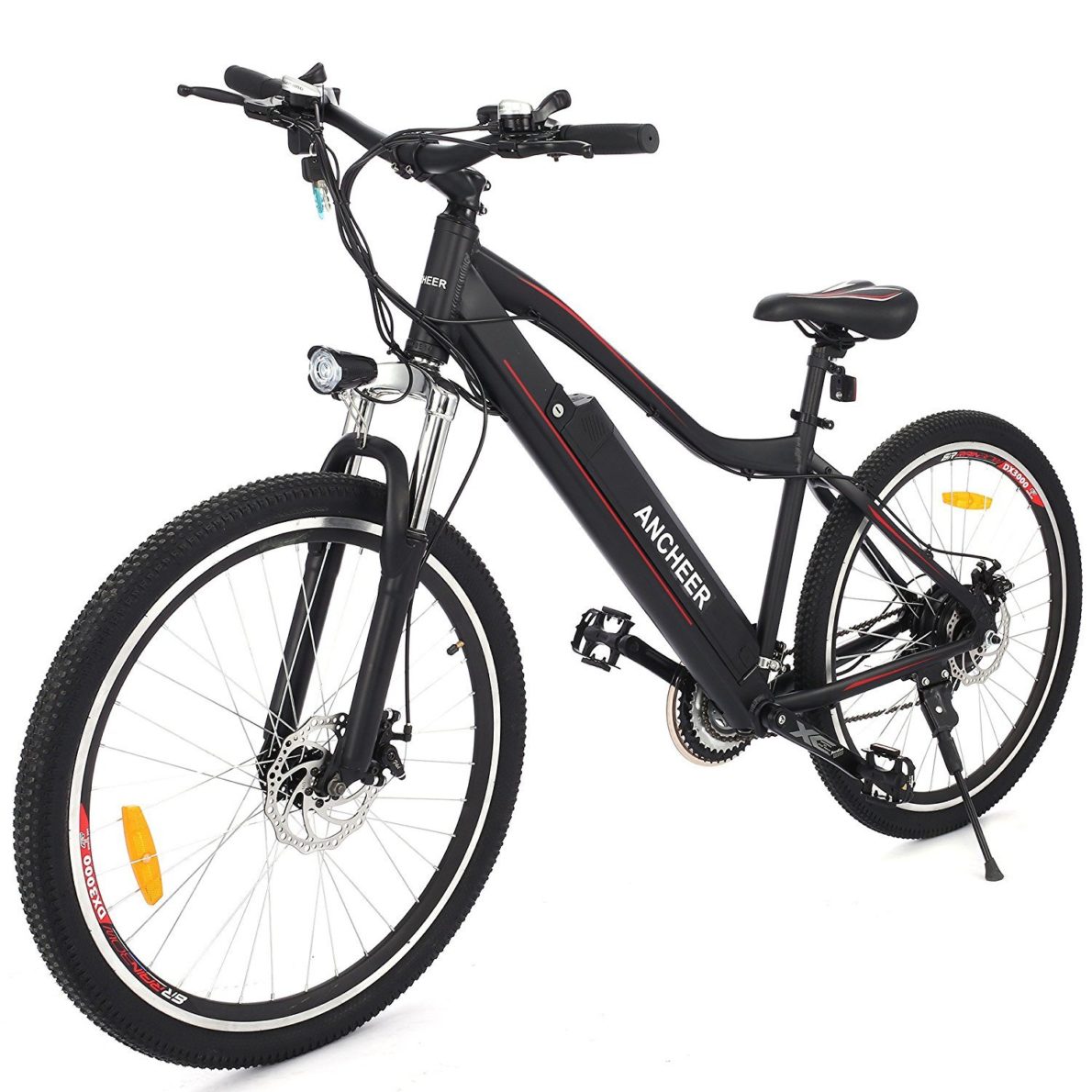