Will an Electric Bike Charge as You Pedal?

Do electric bikes charge when you pedal? This is a question many people ask when they go shopping for an e-bike.

After all, some manufacturers promote their products as having this ability, and the thought that one’s hard pedaling won’t be in vain is a good incentive to invest in a battery-powered bike!

The thing is, there is quite a lot to consider when answering this question,  so in this post we will try to answer this question!

The short answer is Yes, although it’s only possible in a few e-bikes models that manage to recharge through a process known as regenerative braking. Electric bikes with regenerative capabilities will only recharge the battery on average with 10%. Recharge only occurs when you brake lightly as you go downhill or braking when approaching stop lights!

What is Regenerative Braking?

On a typical traditional braking system when the brakes are applied, friction is created to slow down or stop the bike. The action between the surface of the road and the surface of the tire creates friction, which generates kinetic energy.

Under normal circumstances this energy is usually wasted by being released into the air in the form of heat. Regenerative braking harnesses the kinetic energy and converts it into electrical energy before feeding it back into the main battery.

When either the front or rear brake levers are squeezed a signal is sent to the motor controller, quickly converting some of the momentum of the bike into electricity to charge the battery.

Regenerative braking uses the motor to slow you down, your motor can flip into a “reverse mode”. During this, the forward motion of your bike transfers friction and heat into the drivetrain, which is utilized by reverse mode. This action  generates electricity which is fed  back into the battery pack which increases your efficiency.

Hooking Up the E-bike to the Solar Panel

To generate adequate power to charge the e-bike’s battery, the solar panels you choose need to come with a decent wattage output. Ideally, you should look for an option with a cost that is less than a dollar per watt! For instance, a 100-watt solar panel for under $100 is a good deal.

You may find a cheaper panel with a small rating but when you calculate the dollar per watt, you will realize that it’s not that cheap after all. For example, a 10-watt panel for $25 is not cheap since it implies $2.5 per watt.

To cut the long story short, get a solar panel larger than 60-watt for under a dollar per watt! 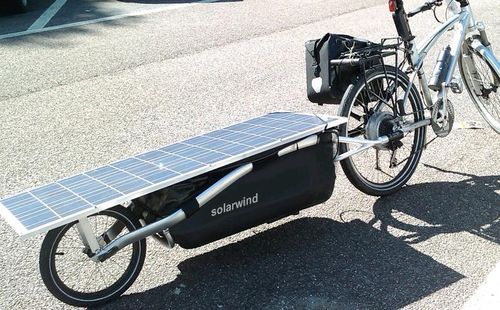 Can you Fully Recharge Your Battery by Pedaling?

Theoretically speaking, it is possible to fully recharge your e-bike’s battery by just pedaling and keeping on the brakes lightly. However, this can be quite a tall order in practice because of the inefficiency of the process. For you to achieve this, it might take an entire day of riding!

Most electric bike batteries can take about six to eight hours to charge through standard charging methods, but you’d have to maintain a speed of about 15 MPH for eight to twelve hours to receive a full battery from pedaling alone.

For a person cycling continuously for several hours, the added resistance from slightly engaging the brakes will burn too much calories. What you’re doing, in this case, is converting the mechanical energy from your leg muscles into chemical energy stored in the battery.

Overall, it is just too much work to fully recharge your battery by pedaling!

Does Regenerative Braking Damage the Brakes on Your E-bike?

No, it doesn’t! On the contrary, the brakes should last longer if you use a regenerative system. Ordinary brakes are not designed to cope with intense use. Manufacturers use them because you can typically control your momentum and speed on a standard bike relatively easily.

Things get even trickier when you add a motor into the mix and reach speeds of 30 to 35mph. That is why bike manufacturers make regenerative brakes with extra power. Hence, your brakes wear down as much as you engage them.

If you commute on a quiet path daily and only need to brake upon reaching your destination, then you are not putting too much strain on the system. However, if you have to commute your way through a busy and crowded street that requires constant braking, then your brakes will wear down much faster.

How Much Can You Charge an E-bike Battery By Pedaling?

This will depend on a range of factors; from the amount of effort you put into pedaling and the time spent to the age of the battery in question. On average, the life expectancy of an e-bike battery is 5 years. After this, you should consider replacing the battery.

As the battery approaches the 5-year mark, it gets harder for it to sustain the charge properly. Even when you try to recharge it to full capacity, it will take some time.

Regenerative charging is a great way of reducing the carbon footprint and could be a great alternative to traditional electric charging. However, you can also use it to prolong the length of your ride. Depending on the settings on your bike, your speed, and the consistency of your pedaling, it is possible to fully charge the battery.

But it’s not as easy as it sounds! This is because ordinarily, it will take you around 6 to 8 hours to completely charge an e-bike battery using the standard charging method. If you decide to charge the battery by pedaling, as mentioned above, you will have to maintain the ride at 15mph for 8 to 12 consecutive hours to charge the battery.

This is practically impossible for an ordinary rider, and will still be a daunting task for a professional cyclist. Charging by pedaling comes in handy when you decide to complement it with standard electrical charging.

Assuming your commute takes one hour and you are pedaling your e-bike to get there, it should give you around 10 to 15% of the battery capacity just during transit.

This reduces the time to electrically charge the battery by the same percentage, which means less time on the charging cable!

How Effective is Regenerative Braking on an E-bike? 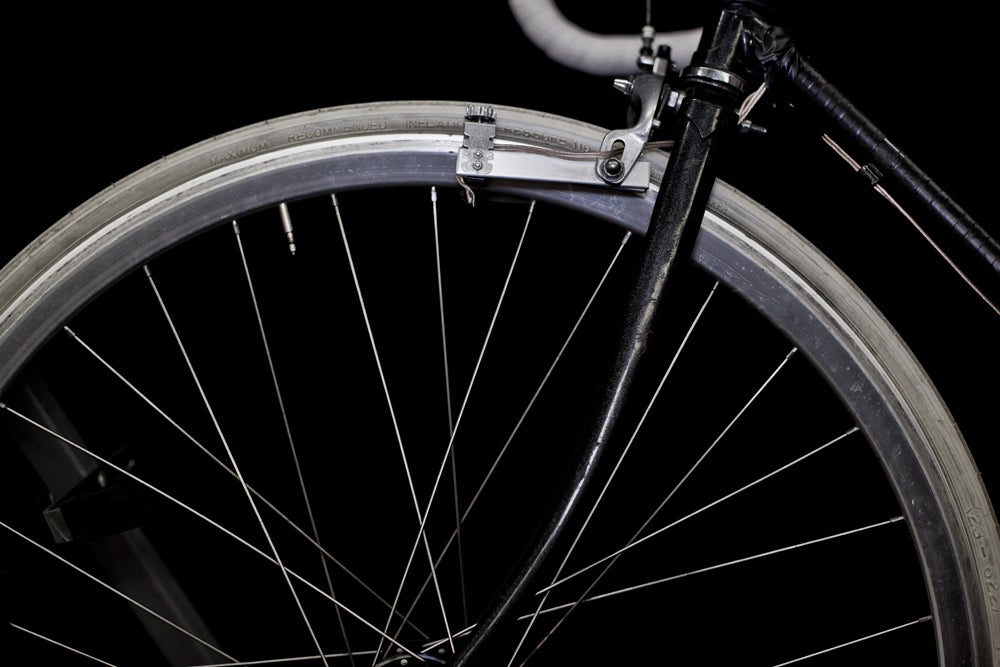 If you are riding on a busy road with many stops, this will require constant braking that enables you to recapture more energy than you would on a relatively clear road. Additionally, if you are going uphill, you won’t generally use your brakes. This limits the opportunity to generate electricity.

Another aspect that can affect regenerative braking is variations in motor torque. Normally, riders tend to vary the amount of braking. For instance, people usually press the brake levers harder when they want to stop than when they are trying to slow down.

This torque variation results in inefficiencies because the regenerative braking considers the variations in torque when calculating the amount of energy to recover.

Does an E-bike Battery Charge When Riding in Throttle Mode?

Throttle mode is when you ride your e-bike without having to pedal. All the work in propelling you and the bike forward is generated by the motor, so you don’t need to pedal. Unlike pedaling, throttle mode does not charge your battery since you can’t recycle the energy output this way.

During pedaling, your legs create kinetic energy that can be converted into electrical energy and fed back into the electric bike battery. This is not possible when your legs are idle; what happens when you’re riding on throttle mode.

What are the Benefits of Regenerative Braking?

One benefit of regenerative braking is that brakes last longer since the motor is used to slow down the bike. This means the brake pads are used less, thus less wear and tear. Compared to a standard e-bike, the brake pads on a regenerative electric bike last much longer!

This will come in handy on a cargo electric bike. The engine braking provided while carrying a heavy load down a steep slope will save your bike’s brake pads from the wear and tear, in addition to providing a slight return in battery energy. 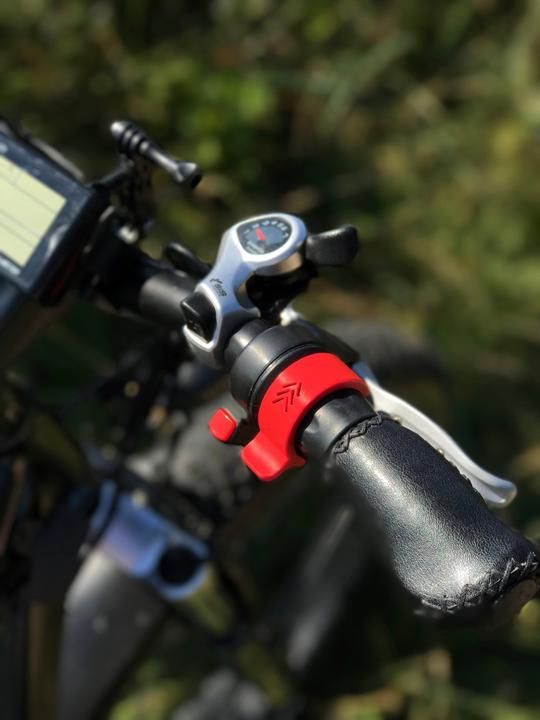 Another great thing about regenerative braking is that it helps to extend the range of the battery. The energy recouped during the process ensures that you get to spend some extra minutes on your e-bike, although it’s not much!

Since braking is applied on both wheels, you will notice uneven wear and tear on the tires caused by the negative torque distribution. Unfortunately, this can easily result in skidding when you brake. No wonder many electric bikes with a regenerative braking system are designed with a rear hub motor as opposed to a front hub motor.

This is because a front hub motor would be much more dangerous for the rider during braking!

Furthermore, trying to pedal continually to make the most of regenerative braking means you will be using too much energy. It will take you a whole day to fully charge the battery, and this will take away from the “comfort” of electric biking.

The 10% power return you get from regenerative braking means you would have to pedal for 10 continuous miles to recoup 1-mile worth of energy. For this reason, you’d be better placed charging your bike’s battery by plugging it into a wall socket.

After all, most e-bikes will take around 6 hours to fully recharge, at the cost of just about 20 cents. It's not like your savings are taking a major hit!

Are there Electric Bikes that are Specifically Built to Use Solar Power?

Currently you won’t find any major manufacturers selling off the shelf e-bikes that integrate solar power capacity. This is somewhat a shame, considering that it would offer a much easier and convenient option of charging your battery.

Nevertheless, several specialized bike models are still in development, so we can expect these to make an entry into the market as the demand for solar bikes grows. One company that is leading the journey to officially launch these types of bikes is Sun-E Bikes.

The manufacturer has produced bike prototypes with photovoltaic cells lined along the frame and wheels. These enable the bike to charge even as you ride. We’ll have to wait a little longer to see what will be available in the market though!

From the post above, it is possible to charge your battery through regenerative braking, which should earn you a few extra minutes when you’re out enjoying a cruise.

On the downside, the process is not as efficient as you may like. You only recover 10% of the charge, which is not really an alternative to standard electrical charging. Furthermore, it’s only the premium e-bike models that come with a regenerative braking system!