How Much Does an Electric Bike Battery Cost?

Most of an electric bike's worth lies in its battery - the priciest component. It is typically worth around 30% to 40% of the bike's value, which means that it makes the biggest price difference as well. However, just like any other part, it’s not immune from the effects of wear and tear.

Eventually, you will be compelled to replace the power source because it will either be damaged or too old - keep in mind that these things have a shelf life.

If it ever comes to this, it is important that you find a new model that fits your budget, as well as your e-bike. So, what is the cost of an electric bike battery? What can you expect?

Generally speaking, a premium e-bike battery retails for around $500-800, but this is obviously determined by many factors, including the brand, the quality, the capacity, etc. The before mentioned price would is typical for a battery with parameters between 400wh and 700wh.

Note that batteries manufactured by big brands usually cost more than off-brand models, so keep that in mind as you consider the cost/Wh.

Comparing the Cost of E-bike Batteries Between Brands

Multiple companies each with their own brand manufacture batteries for electric bikes, and they have their unique level of quality. This also means that you need to research your budget and see what fits best.

Bosch might be one of the priciest manufacturers on the list, and one of the most famous ones as well - at least when it comes to electric bike batteries. A pack from Bosch retails for a price anywhere between $675 and $925. This translates to a rate that stands around $1.72 per Wh.

For instance, the Bosch Powerpack 500 frame, which is rated at 500wh capacity, costs over $900 on Amazon.

Shimano is another popular brand in the market selling e-bike batteries. Their prices stand anywhere between $500 to $750, which ends up costing approximately $1.42/Wh. 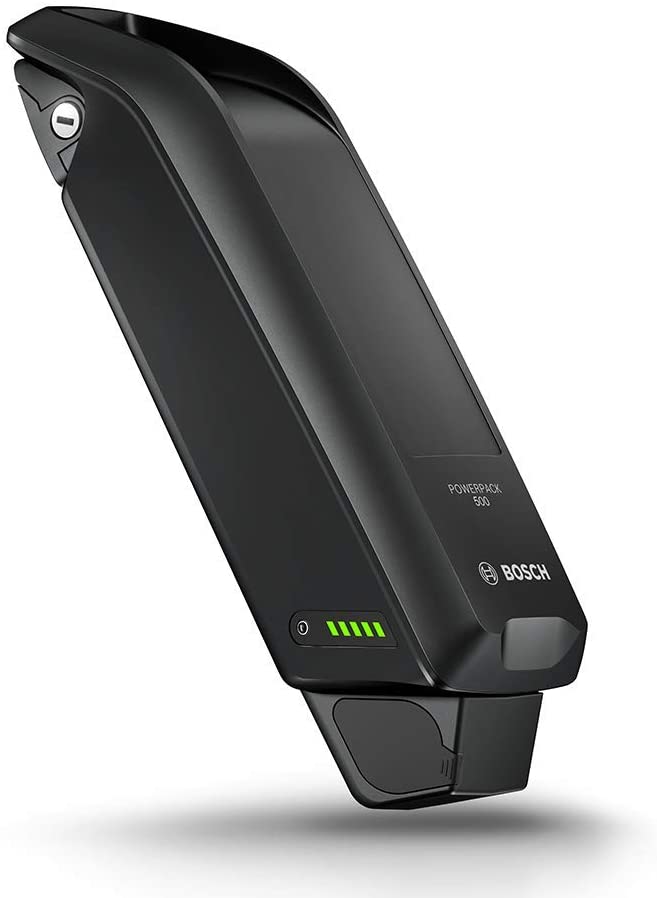 Finally, if you are not looking to spend too much on your brand new battery, there is always the option of looking for something more price-friendly. We suggest you look for an off-brand battery, but don't compromise the cell quality. That's why you should look for brands such as Samsung, Panasonic, or LG that will rate at about $0.82 per Wh.

These will serve as a great alternative to the more expensive Bosch power pack. Below is a list of some e-bike battery brands and their price range on major online retailers:

However, you should note that the lower the price of an e-bike battery, the lower expectations you should have - there is a strong link between the two.

Read next: How much do electric bikes cost?

Most of these budget-friendly batteries are manufactured in China and you can find them by contacting the sellers directly. Unlike the cells from Korea and Japan, China doesn’t have a reputation for producing quality 18650 cells.

Also, keep in mind that these battery packs from China sometimes don't have the high production value that "legit brands have" - the could be made out clone cells or reused materials. This generally results in underwhelming performance and a relatively shorter battery life expectancy.

Not to mention, these kinds of batteries are truly problematic sometimes and they can be a real problem when it comes to flammability. So, before you decide to go for the cheapest model you can find, keep the above mentioned facts in mind.

What’s Inside the E-bike Battery?

Most modern electric bikes have lithium-ion batteries built into them, and these consist of lithium-ion cells and a Battery Management System that takes care of the battery health.

The default e-bike battery pack consists out of smaller source cells that are typically arranged in the 18650 format. Each of these cells is only a little bit bigger than a regular AA battery. They also usually have a 1.5V charge. Meanwhile, their capacity is anything between 3200 and 350OmAh.

The small cells are usually arranged in either series or parallel to make up a large battery. The actual number of cells arranged might be different than expected because we need to take into account the capacity and the voltage. The type of arrangmenet is also very relevant.

For Bosch power packs, the number of individual cells is between 40 and 50.

What is a Battery Management System (BMS) in E-bike Batteries? 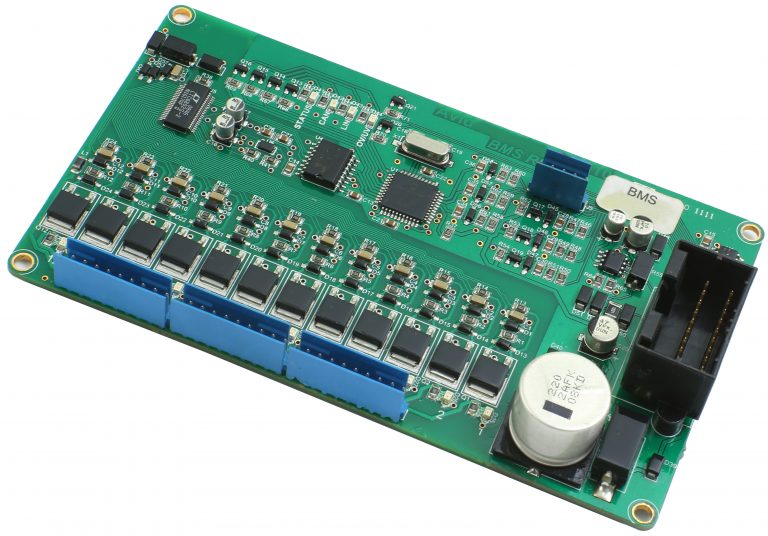 Some of these electronic bike batterie brands also use an integrated BMS, which is essentially the "control panel" for the battery. All of this serves to maintain balance as well as safety for all parts of the battery, each cell inside it, as well as the wiring. Performance obviously depends on battery health.

This system is quite important as it regulates the current that travels through the battery while it is charging, but also while it is being used. Some Battery Management Systems have the ability to monitor the temperature of the battery because this can prevent damage to the that happens when the system is overheated.

Some BMSs have the ability of Bluetooth connection, which gives you a great overview of your battery status through your smartphone.

How Costly is E-bike Battery Charging?

Many forget that aside from the initial investment you make when you're getting the actual product, you need to cover additional costs related to battery charging. Most bikes have a battery rated between 300-500W, which means you will have to get a 2-Amp or 4-Amp charger.

If you have a battery with more capacity, you will have to give it more time to fully recharge. A standard e-bike battery takes about 4-6 hours for a single full charging, and it can provide anywhere between 25-80km depending on the level of pedalling assistence you decide to go for.

You will basically need to recharge the battery after every 4-6 hours if you were to use the bike at all times. Keep in mind that the cost of battery charging varies depending on each country. Typically, the rates can range from 5-dollar cents per KWh to 35-dollar cents per KW/h for those in the United States.

Another important thing worth noting is that you'll have to charge your bike as much as you use it with the assistance set to max. Basically, if you are almost always in throttle mode, you can expect a shorter shelf life for your battery, as well as more charging per week.

How Long Does an Electric Bike Battery Last?

The lifetime of a battery is usually determined in charge cycles. This means that you can count how many complete charge cycles you can go through before the battery isn't effective anymore. Note that a full charge cycle isn't just "any charging" but the full movement from 0-100%.

Generally, an e-bike battery can go through several hundreds of charge cycles. However, the actual number will depend on the nature of the battery you’re using, as well as the overall maintenance of the battery.

For instance, if you tend to store your battery pack in a dry area that is well shielded against temperature fluctuations, then you will enjoy longer service from it. On average, the battery becomes less and less efficient after 3-5 years of use.

An e-bike’s battery shelf life is mainly influenced by the type of battery it is. Usually, the most common types you’ll find in the market include:

How To Extend the Life of an Electric Bike Battery?

There are a couple of e-bike battery maintenance practices that you should adhere to if you want a long life for your battery. These will come in handy whenever you’re charging, storing, as well as cleaning the battery. In short, you should do the following: 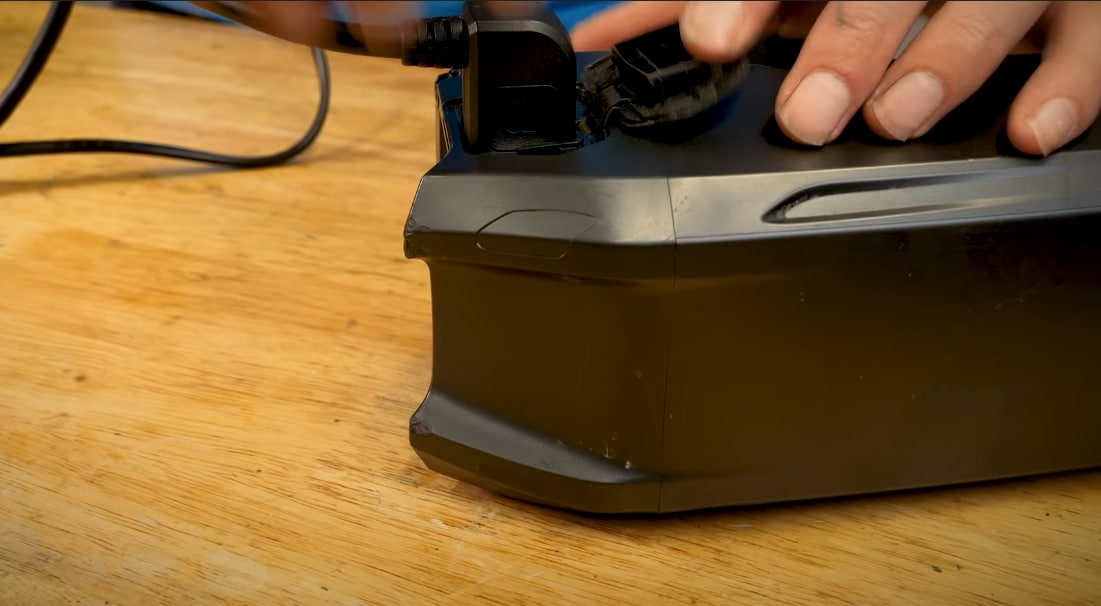 During charging, you want to make sure that you’re using the charger and adapter that came together with the e-bike battery. This will save you any problems arising from overcharging, as well as damage as a result of short-circuiting.

Before charging the battery, allow it some time to cool, and avoid using it immediately after recharging. Don't wait for the battery to be fully drained before charging and when you charge your battery, make sure it gets to 100%.

Lastly, if you won’t be riding the e-bike for a long while, try to partially charge the battery pack every few months.

During storage, it is advised that you find a cool and dry place for this. Ideally, find an area with temperatures between 0 and 20 degrees Celsius to maintain the battery’s capacity. Also, avoid exposing the battery to direct sunlight or placing it close to heat sources.

The first thing to take note of is that water and electricity don’t mix, so you don’t want to use steam pressure when cleaning the battery. Instead, find a damp cloth and wipe any dirt, grime, and dust off the battery.

Whether you are planning to replace the battery you already have or motorize your regular bike using an e-bike conversion kit, you should have a good idea of the type of battery to invest in.

Remember that the battery is the bike component that will cost you the most, and that you will need to replace it eventually. This article lets you know how much money you need to set aside for the battery, and how often you have to make this investment.